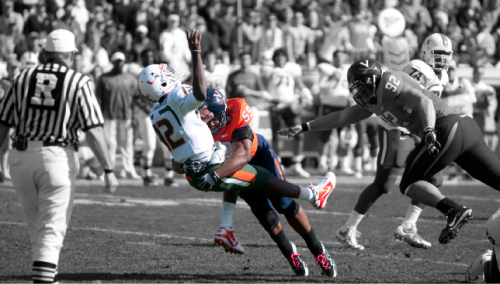 A SEASON LOW: Jacory Harris is taken down by defensive tackle John-Kevin Dolce at the Miami vs. Virginia game in October. The breathtaking hit put him out of play for three games and stunned the Cane community. Sports injuries like Harris’ concussion have recently become the focus of media and medical scrutiny.

Many students like Zamora had a similar reaction on Oct. 30, when University of Miami junior quarterback Jacory Harris fell victim to one of the biggest hits of the college football season.  University of Virginia defensive tackle John-Kevin Dolce knocked Harris out of the game with what was later determined to be a concussion.  The hit changed the course of Miami’s season and Harris would not see the playing field for the next three games.

“It was interesting at first,” senior Jeremy Jeffers said. “On the actual play, you did not see the hit live because there was an interception.  When they showed the replay of the hit, it was a sobering, ‘Oh, he is going to be out for awhile.’ When someone is on the ground for that long you start to realize the seriousness.”

Although the hit was difficult to watch the first time, many fans could not keep their eyes away from the screen when replays were shown.  Footage of the hit has even received over 100,000 views on Youtube.com.

“Depending on the sport, people tend to cheer on the big hits, tackles, and stops because that is part of what defines sports as a whole,” Zamora said.  “But you can never really imagine what the player might feel throughout his body the immediate second it happens.”

Fans do not attend hockey games to see precise passing and smooth skating; they show up for the fast-paced action and the hard hitting.  Boxing and mixed martial arts fans do not spend cash on pay-per-view fights for any other reason than watching two men or women knock each other out.

“We view athletes as superheroes and do not think about them being hurt,” said Dr. Kysha Harriell, director of the athletic training education program in the department of kinesiology and sport sciences.  “As fans, we do not feel bad because we think players are fully protected by pads. We are all guilty of rewinding the hit.”

In reality, sports related injuries, particularly more serious ones such as concussions, have become the focus of media and medical scrutiny.  The National Football League has received much of this negative attention, largely due to a statement made by Pittsburgh Steelers linebacker James Harrison, after a win against the Browns this past October: “I try to hurt people.’’

Harrison was fined four times by league officials during the regular season, totaling $125,000.  Some players have vocally expressed their dissatisfaction in the league’s policies on helmet-to-helmet hitting, saying that fines are not enough.  With the league’s current collective bargaining agreement set to expire March 3, players are looking for more safety-related measures in the next agreement.  While league officials are being blamed by the players, perhaps it is the players’ fault, especially when you consider the landscape of football from the high school, college and professional levels.

“Injuries are happening more often because the athletes themselves are getting bigger and stronger,” said Harriell.

The more severe injuries include broken bones, torn ligaments and, of course, concussions: a brain injury caused by a significant blow to the head.  It is a very serious condition that is sometimes difficult to recognize due to the damage occurring on the inside of the body.

“Short-term effects of a concussion can include mild dizziness, inability to concentrate, loss of coordination and, perhaps unknown to many people, changes in personality and attitude,” Harriell said.

Long-term effects of a concussion can be even more severe: brain damage, high sensitivity to sound, severe memory loss and a lifetime of headaches.  In some cases, concussions have led to death, especially if they go unnoticed or have not healed prior to an athlete getting back on the playing field. 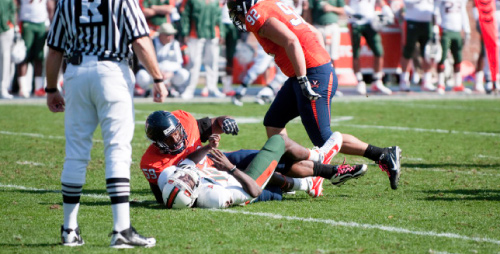 A SEASON LOW: Jacory Harris lies on the ground after being taken down by defensive tackle John-Kevin Dolce at the Miami vs. Virginia game in October.

Athletic trainers are working harder to ensure the safety of the players.

“The precautions taken now were not like around 20 years ago,” Dr. Hariell said.  “Doctors are looking at cadaver brains; athletic trainers and players are more educated now than ever before on concussion protocol. Educating the athletes is most important.”

According to Harriell, there are two major components of concussion research being studied in the field today: second impact syndrome and chronic traumatic encephalopathy.

According to Entertainment & Sports Lawyer, chronic traumatic encephalopathy (CTE) is a neurological disorder first discovered in boxers, jockeys and wrestlers who sustained multiple blows to the head.  Individuals with CTE can experience severe inability to control emotions and impulses, memory loss, depression and dementia.

Doctors who performed an analysis on the brain of Andre Waters, a former Philadelphia Eagles player who committed suicide in 2006, discovered that CTE had reduced Waters’ mental acuity to that of an 85 year-old with early Alzheimer’s. Waters took his life at the age of 44.

Despite these stories, the danger associated with sports seem to have little impact on fans.

“The players get paid a lot. They know the risks is the general public view,” Jeffers said. “So as fans, we do not have to worry.”

But what about the players? In the past decade, athletes have become bigger, faster, stronger and more athletic than their predecessors.  Student athletes as young as 13 are evaluated in numerous categories in the hopes of receiving lucrative athletic scholarships by the time they graduate high school.

In a recent survey by ESPN the Magazine, 300 high school football players from around the country were asked, “Is a good chance of playing in the NFL worth a decent chance of permanent brain damage?”  A total of 44.7 percent responded “Yes.”  It may sound crazy to fans, but athletes who put themselves through grueling, physically demanding tests every day have a dream of a brighter future.

“If you take a kid, who has the NFL as his ticket out and can support his family by playing in the NFL, I can see him weighing the risk,” Harriell said.  “As a health care provider, it is not worth it.  But as an athletic trainer, I understand why they responded that way.”

Jeffers said he thought it was hard, when asked the same question posed to the 300 players.

“For people in a situation where football is all they have, I think it is worth it for them,” Jeffers said.

Players and fans alike do not want sports to change to the point where the physical elements of the game are entirely removed.  However, ensuring the safety of athletes both in the short- and long-term is becoming more important.

The field of athletic training, although relatively new, will be critical to the development of safer athletic practices.  But will fans ever stop watching replays of big hits?

“It is important to remember that we are not celebrating the possible concussion or the health issues they may face,” Zamora said. “What you are celebrating is the veracity of the players, the passion with which they defend their ground and protect the ball.” 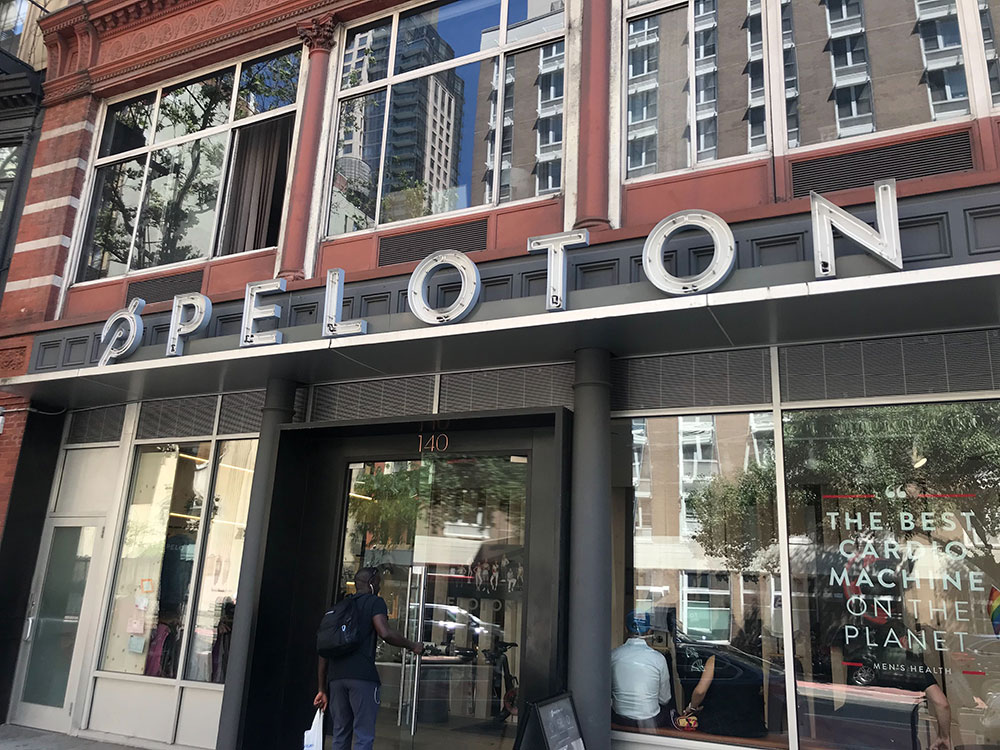 Why I Joined the Peloton Cult and How YOU Can For Free!