A Tenure Defined By Success 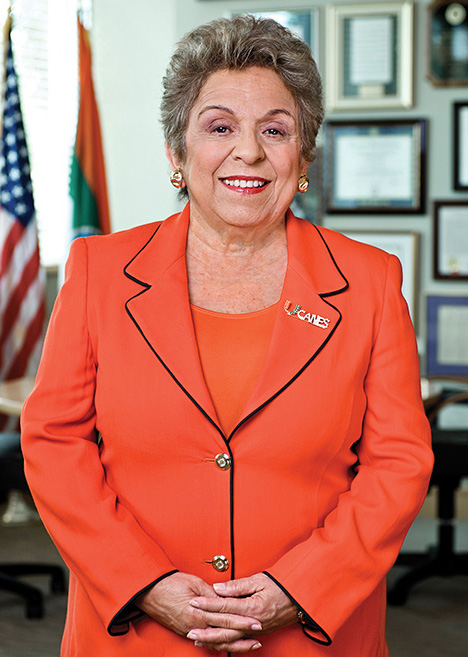 University of Miami President Donna Shalala plans to step down at the end of the 2014-2015 academic year.

On Monday, barely half an hour before noon, the University of Miami community received a letter with an announcement few expected. After a 14-year tenure, President Donna Shalala announced she plans to step down at the end of the 2014-2015 academic year.

“I was very surprised to learn she’s leaving,” said Lucia Extrakt, a senior in the School of Business. “But I guess 14 years is a long time and it’s better to leave now that she’s on top and our school is in an upward trajectory.”

Shalala leaves big shoes to fill. The University’s academic level improved significantly since she took the helm. Freshman applications to Miami for fall 2014 went up to 31,614, compared to the 14,721 received for the same semester in 2001. The mean SAT score for incoming freshman also rose, currently at 1325. The University of Miami has been ranked consistently as a top 50 university in the country for the past few years.

“Shalala made UM a top university on many levels,” said Daniela Zisman, a junior majoring in Economics. “I hope the school can find someone as good as her to continue the legacy she built.”

That legacy also includes making UM a top-tier research institution. According to the President’s letter, “collectively we have accomplished what we set out to do—secure the University of Miami’s place as the next great American research university.”

Faculty research increased by more than 71 percent, according to the office of the President, “from $202 million in 2001 to more than $346 million in Fiscal Year ’13 in support of more than 2,250 extramurally funded projects.”

President Shalala also led the university as it became part of the Atlantic Coast Conference and as it navigated the long NCAA investigation. She first opened the doors to the association’s process, but demanded respect and fairness when it surfaced investigators were breaking their own rules. In doing so, she gained more respect than she already had in the eyes of the students.

“She stood up for us,” said Zisman “She’s a strong woman. She didn’t let our school be stepped on by the NCAA. It had been enough, and she didn’t allow them to ridicule us.”

But more than academic and institutional accomplishments, Shalala created a reputation for being accessible to students. She walks nonchalantly around campus and attends almost every sporting event. Each year she hosted freshman at her house for a picnic.

“It’s a sad change,” said Zisman, “But UM is a strong community, and we will continue to see improvements in our school.”

Who will be in charge of those improvements in the future is yet to be determined. To find the university’s next president, the Board of Trustees announced the establishment of a Presidential Search Committee. Richard D. Fain, Vice Chair of the Board and CEO of Royal Caribbean Cruises will head the committee, in what will be, according to a statement released Monday by Stuart Miller, chairman of the Board of Trustees, an “inclusive process” which will seek “valuable input from the greater University of Miami community.”