An in-depth look at UM’s very own gridiron superhero

Allen Bailey’s shy yet infectious smile spreads all the way through his deep brown eyes. With his bulging biceps, 6-foot-4 frame and shoulders that look like they could easily lift a Volkswagen, his gentle handshake takes me by surprise. My apprehension over meeting the player who so powerfully executes tackles on the field and induces fear in the eyes of his opponents is immediately shattered. 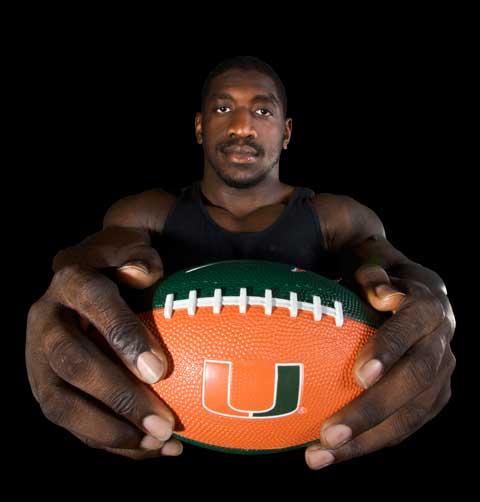 A MAN OF MANY NAMES: Defensive lineman Allen Bailey has many nicknames, from Big Bailey, to Big Dog, to The Green Mile and even The Hulk. The soft-spoken senior, towering at 6-foot-4, hails from the small town of Sapelo, Ga.

But just three days before this interview, Bailey showcased that intimidation, latching onto anything scarlet and gray, tackling with no mercy. The Ohio State game didn’t end with a win for the Hurricanes,  but Bailey emerged victorious. With six tackles, the defensive end proved that he is NFL worthy.

This is no revelation. The senior from Sapelo Island, Ga. could have been drafted to the NFL last year as a junior. However, after coming off a less than impressive second-half of the season, Bailey decided to represent the Hurricanes for one more year and hopefully add a championship to his already staggering statistics. Last year, he led the ‘Canes with seven sacks and 11 tackles for loss. This year, his goal is to achieve double-digit sacks.

But there is a lot more to Bailey than his impressive football statistics; his upbringing alone proves he is no typical born and raised South Florida ‘Cane.

He is speaking of his hometown, Sapelo, a small island off the coast of Georgia. The island boasts only one community and is home to less than 70 people, most of whom are descendants of slaves. This is where Bailey started his football career, playing pickup games with his siblings and cousins.

“On the island, we didn’t have pee wee leagues or anything. The first time I started playing organized football was in seventh grade,” Bailey said.

The second youngest of seven children, each sibling only one year apart, Bailey is the only collegiate athlete in his family. But he’s not the only one with size.

“Everyone’s big, even the girls. And I think all the boys are over 6-foot-1. But my parents are just normal. My dad is 6-foot and my mom is 5-foot-7,” Bailey said. “I know our height and size comes from somewhere, ‘cause some of our cousins are big too.”

Maybe it’s all of that good southern cookin’ and the occasional raccoon that Bailey admits is a dietary norm at Hog Hammock.

“I’ve never cooked it. I’d definitely mess it up. But when I go back, sometimes we eat that,” he said.

MAKINGS OF A STAR
In June 2007, Bailey moved from Sapelo Island to Coral Gables to begin his college career as a Hurricane.

“The hardest thing was the people. At Sapelo, everyone greets each other with a wave, even if you don’t know them. It’s just what you do,” Bailey said. “Here, people don’t even look you in the eye.”

But besides the people, Bailey said the transition really wasn’t that difficult. During middle school, he would take a ferry ride from the island to the mainland every day. As his football schedule intensified, Bailey made the tough decision to leave home and live with a friend for the duration of his high school career. The summer after 10th grade, he realized that he may have a future in football.

“I got an offer from the University of Georgia. I realized I could play college ball and benefit from it, like [receive] a free education. I started to think about it deeper and deeper,” Bailey said.

Luckily for Bailey, he had a remarkable junior year of high school because, two games deep into his senior year, he injured his lower back forcing him to sit out the rest of the season. But that didn’t deter newly appointed Coach Randy Shannon and former Recruiting Coach Clint Hurtt from making a visit to the island to see the so-called “defensive beast” for themselves.

“Athletically, I have never seen anyone or anything like him. I thought Sean Taylor and Andre Johnson were the best physical specimens you could ever see ‘till I met and coached Allen. He is a rare talent, although still raw, but the sky is the limit. His mere presence would be an asset to the team over his career because having a guy with his talent and work ethic raises everyone’s level of play,” said Hurtt, the University of Miami defensive line and recruiting coordinator from 2007-09.

Bailey said he chose The U because he didn’t feel forced to come here; it was an intuitively natural decision. Although the biggest and tallest kid in his class since fourth grade, Bailey said he was quiet and kept to himself. He credits football to helping him open up.

“I was kind of shy. But football opened doors for me; it helped me meet new people. Football gave me that bond,” Bailey said.

And now as the co-captain of the team, Bailey has to be more vocal than ever, even if it is just by leading by example.

“He’s a beast. He’s the strongest guy on the team.” said Damien Berry, senior running back. “And even though he’s quiet, he’s like the shoulder of the team.” 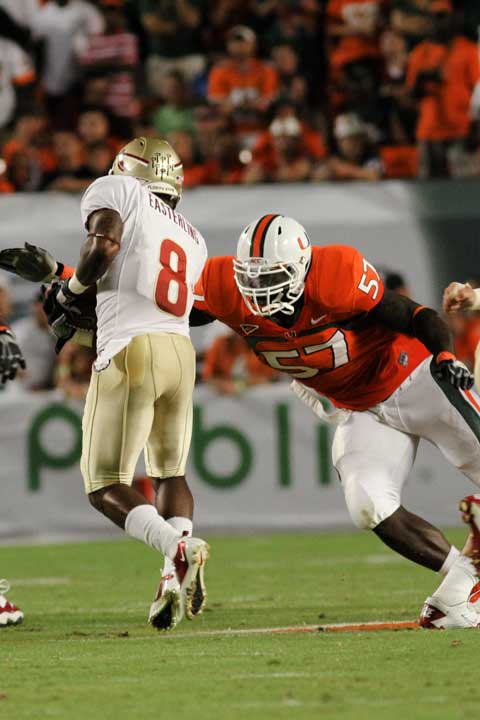 THE HULK IN HIS ELEMENT: Allen Bailey dives to block Seminoles offensive player Taiwan Easterling in the highly-attended Saturday, Oct. 10 game where the ‘Canes fell to their biggest rival, Florida State. Bailey had one solo and one assisted tackle in the game. The game ended with a 45-17 final score, favoring the ‘Noles.

POPEYE
The soft-spoken Bailey has been dubbed the Shoulder, the Beast, the Hulk, Big Dog, Popeye, Bailey Biceps and more all because of his tremendous strength. He can bench press more than 420 pounds. Last year, he received the team’s Strength Training Athlete of the Year Award.

Christian Ponder, the Florida State University starting quarterback, said in an interview with The Miami Herald, “I didn’t realize how big [Bailey] was. He’s like the friggin’ Jolly Green Giant.”

Bailey said he is just focused on sustaining his muscle mass and maintaining his weight for the NFL.

“I have to be patient with the NFL. It’s not like being drafted out of high school. It’s more just like the roll of a dice.”

But to imagine not playing in the NFL makes Bailey a little more than uncomfortable.

“I’ve never had a real job. Like I’ve never even worked at McDonald’s, not even in high school. I know if I needed to get a real job, I could figure it out, I’d get used to it. I’m not scared of that but it just makes me a little nervous,” Bailey said.

Mary, Bailey’s mother, and the rest of the Hog Hammock community have high hopes for him.

“A lot of people here are University of Georgia fans. But because of Allen, now people on the island always watch the Miami games. People are always asking about him,” Mary said. “If he makes it in football, he’d be the first person born and raised on this island to make it that far. We’ve never had someone do something that big before.”

When asked his major, Bailey hesitated and then responded: “I think liberal arts or liberal sciences.”

He laughs because he knows as a college student he shouldn’t have to think to answer that question, but for Bailey, football has been his college education. He hasn’t had much of a choice in that matter.

“Football is like a job here. Between double practices, film, meetings, it takes up so much of my time. During the season, I’m so tired, plus I’m taking five classes,” Bailey said. “I’m looking forward to the spring when I can actually take a real break, relax and sleep.”

After the season, the senior hopes to go back to Sapelo Island and be with his family. Mary promises to make his favorite home-cooked meal of ribs, chicken on the grill, macaroni and cheese and baked beans.

“Just last night I talked to him on the phone and told him his father’s thinking of retiring. He’s worked on the ferryboat for almost 30 years. Allen asked us to wait to celebrate until he can come home. So that’s what we’re doing…we’re waiting for him,” she said.

And by age 30, Bailey hopes to have a family of his own, although he doesn’t plan to raise his children on the island.

“I’d definitely want to show them the island, go there on vacation, just to get away from the norm but I don’t think I want to raise them there,” Bailey said.

For now, Bailey is focused on winning the ACC Championship with a team that gave him a voice and the players that became his brothers away from home.

“It’s been awesome seeing this team change and come together. We have such a strong bond now that we didn’t have when I first started here. We’ve grown tremendously. We are family,” Bailey said.

A TRUE ‘CANE: Allen Bailey shows his Miami pride with a vertical “Canes #57” tattoo, stretching from his hip to his shoulder. He decided to get the tattoo after a year of playing for the Miami Hurricanes.

Sony Open: Florida's own Sloane Stephens advances to third round