Dating in the Social Media Age 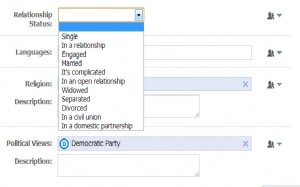 We all know relationships and dating can be hard, but have we unknowingly made it even harder? Who would do such a thing? I know… but it turns out that dating nowadays just isn’t what it used to be, and I think we know why. Thanks to living in the twentieth century, all of our “knights in shining armor” have a new piece of metal to work with— their computers. Surprisingly, this little device can cause a whole lot of damage when it comes to relationships. The geniuses of our generation have created something that the majority of the population now uses, social media. We have Facebook, Twitter, and Instagram, just to name a few.  With all of this technology and people constantly updating statuses, taking pictures, and adding one another as friends, it’s difficult to keep anything secret anymore.

You all know what I’m talking about; we all do it, it’s okay, don’t be ashamed… the “facebook stalk.” Before, during, and even after dating someone we will all nonchalantly take a little peek online to see what our significant others are up to, and this goes for any type of social media. Some people might find themselves asking, is this even healthy? Well, truth is that it’s only natural to be curious. Senior Dvora Harel recalls “I was dating a guy in high school and I knew he was kind of a womanizer and he would tell me ‘no you’re the only girl I’m talking to’ but then you would just see him talking to girls on his page and it just makes it so easy to catch people in lies.”

Somehow I still find myself wondering what it would have been like dating when none of this unnecessary drama even existed. Ah, now wouldn’t that be nice? Just imagine a world where there wasn’t the constant feeling like somebody is watching every little thing you do or that you have to constantly keep tabs on this person to make sure they’re treating you right. I’m sure you’ve all gotten “the speech” from your parents: “Well back in my day…” Yeah yeah, we know. These days, it’s almost like you can figure out so much information about a person just by looking at what they put out online for everyone to see. “Oh so I see your favorite show is Gossip Girl and you really like Italian food, huh?” Um yeah… creepy! “It’s so easy to look on someone’s profile and see what organizations they’re involved in or their interests and hobbies. Everything is out there,” Harel said. Doesn’t this take away half the fun of starting to date someone new: when you’re finding out all the details about this person’s life and seeing if you two are compatible? The mystery is gone my friends.

Let’s see a show of hands, who has ever been hit on via social media? Yeah, we’ve all been there. The pokes, the messages, the comments, and the likes… all an electronic form of saying “hey, you’re hot.” Junior Katie Beam says, “there’s definitely creepy guys that I’ve never even met before that comment on my pictures like ‘you look hot’ and I’m like who are you?” If you happen to be in a relationship, then these things can only get you in further trouble. “So who’s that girl that liked your photo, huh?”… Sound familiar? Sophomore Dennis Campbell says that social media “can be a killer because if you see a message or a wall post from another person talking to your significant other in an inappropriate way, it can cause some serious drama.”

So now that we have all the evidence, is social media a positive or negative when it comes to the love department? Well four out of five of you said it was a negative but when asked if you would give up social media for a relationship five out of five of you also said no. Senior Mitchell Phillips says, “I am not willing to give up a part of my life just for the other person’s insecurities.” So now we leave it up to you: have we given up on love or are we just too obsessed with the Internet to see the harm it is causing us and our relationships?

Up and Coming: Grant & Duval