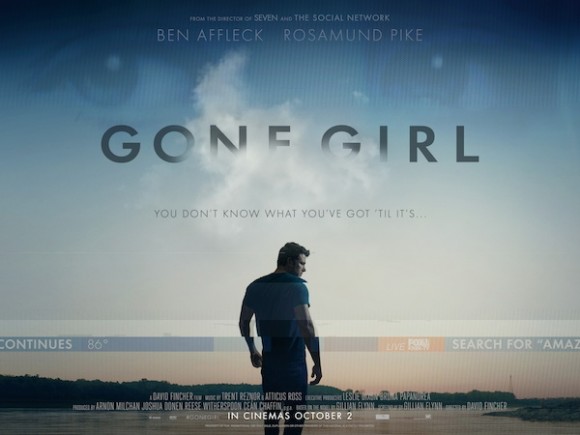 There’s a shot in Gone Girl, David Fincher’s newest film, where Rosamund Pike stands perfectly placed at the center of the frame. She’s making crepes. Perched slightly to her right is the house cat. The camera moves towards her and she breaks the fourth wall. It only takes a couple seconds, but it’s there and it makes your bones shiver. A couple minutes before this she commits murder, and now she’s making French pancakes. Such is the world of this Amazing Amy, a wife and sociopath who apparently ruins all men who dare fornicate with her. This is why your parents teach you that sometimes the best course of action is to keep it in your pants.

I’m going to try and review this film with the least amount of spoilers possible but be warned. If what you’re looking for is a recommendation then by all means go watch it. The movie is fantastic, another in the line grim reapings at the hand of David Fincher.

The film seems to be cut into two. The first half is when Ben Affleck impresses. You can’t seem to figure out what exactly is going on with him. Is he a nice guy? Is he a sociopath? He’s probably a sociopath? Oh wow. He’s definitely not a sociopath… but maybe… and so goes the movie. The two main characters are unreadable and that makes them creepy. You know people like this. The kind that always wears a different mask and proves to be all sorts of unpredictable. Except you never marry them. Here, they’re married.

Fincher displays their married life as a makeshift Hallmark movie. There is no cinematic feel to these people living in their bland Missouri neighborhood. It’s flat and uninspired, and obviously intentional. Fincher creates a vision of American life through the look of the camera. These people are giving up, and you can see that through the images on screen. It looks dull. As the movie gains speed through its psychosis, the film revels in its eeriness. Rosamund Pike is wonderful as a psycho hose bitch. She dons the different masks here, but you can always tell who’s wearing them. The camera is the engine to the films creepiness. It twists and turns throughout the different homes. There’s a particular shot where Fincher shows us the action from the perspective of the security camera. It’s the most visual example of the antagonist’s manipulations we get in the film. You immediately understand what exactly it is you’re dealing with. Except you don’t. The movie gets darker. Blood joyfully splatters on the character and she dons it with the same Hallmark grace (and dullness) from the beginning. But, now the audience knows better. Now the Hallmark feel freaks you out.

David Fincher’s art lies in creating anxiety and tension. In Gone Girl, he accomplishes the same thing he does in Fight Club, Panic Room, Se7en, etc. The movie slowly creeps up on you, and before you know it, it’s sinister grip has you possessed and you can’t get out. It’s a marvel at how effective Fincher is at creating these kinds of film. He’s not like most suspense directors who accentuate the pulp and struggle of the danger. Fincher makes the danger feel hollow and unrewarding. He doesn’t want to excite you. He wants to engage you on a human level. What happened in this film is so wrong, but I kinda like watching it. You feel as wrong about yourself as you do about the movie.