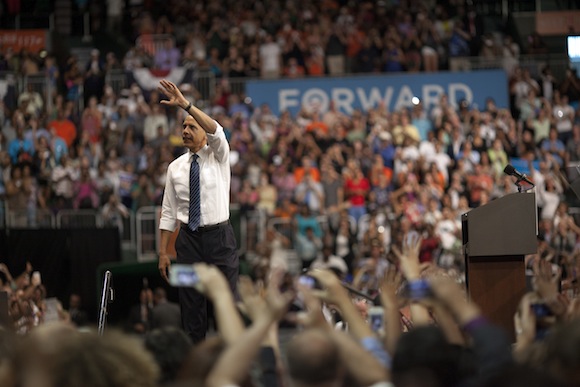 If you took into account the number of times Barack Obama has visited the University of Miami over the past year (that’s 3, if you’re wondering), you would undoubtedly believe that the president is “All About the U.”

According to Fire Marshal Lowman from the City of Coral Gables, 9,200 students, citizens and non-citizens filled the Bank United Center to hear the president speak just hours before Vice President Joe Biden’s debate against his opponent Paul Ryan.

The line for the event began forming at 11:00 a.m., and by 2:00 it had stretched two fold around the Rhodes House and continued all the way through the library breezeway.  Independent vendors sold election buttons, t-shirts, posters and signs as people waited. One man even went so far as to sell his own originally produced reggae tracks in celebration of the President.

A man sells buttons outside of the Rhodes House hours before the president takes the stage.

Students were interested in hearing about an array of issues, from health care reform to the environment. Because of UM’s location, however, immigration and education seemed to be hot topics for many.

“Since Miami is diverse, I want to see his view on immigration and I want to know what he has to say about the future of students. I think others should get the same education,” said senior Andrea Jacobo. His diverse background was a winning point for her and her Dominican friends, who claim that “Obama es el Moreno que necessitamos.” 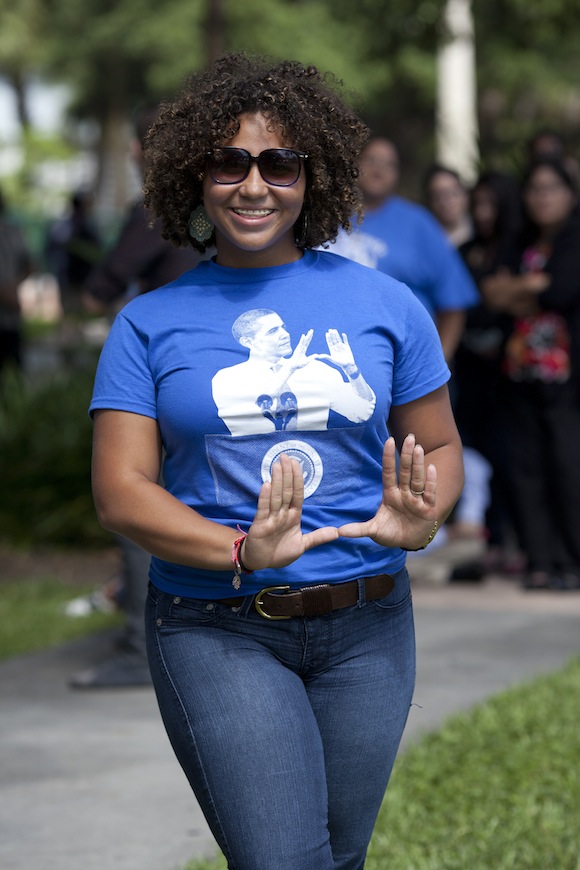 Senior Andrea Jacobo throws up the U while waiting in line to see Obama. Jacobo believes the presidents diverse background enables him to be more aware of other countries. “Right now, we are a superpower. We need to be a superfriend.”

But amidst the excitement to hear Obama’s positions on “the issues”, there was one question at the forefront of everyone’s mind: could the president redeem himself from his moderate performance against Governor Mitt Romney in the recent presidential debate?

“I want to hear some excuses for the last debate and why he was so polite to Romney,” said sophomore Roy Williams. “Why didn’t he mention the 47%? I want to know if it had anything to do with his anniversary.”

While the third part of Mr. William’s question may forever remain a mystery, the grassroots rally did indeed prove that the Democrats would not be outdone by the Republican Party- without a fight anyway. 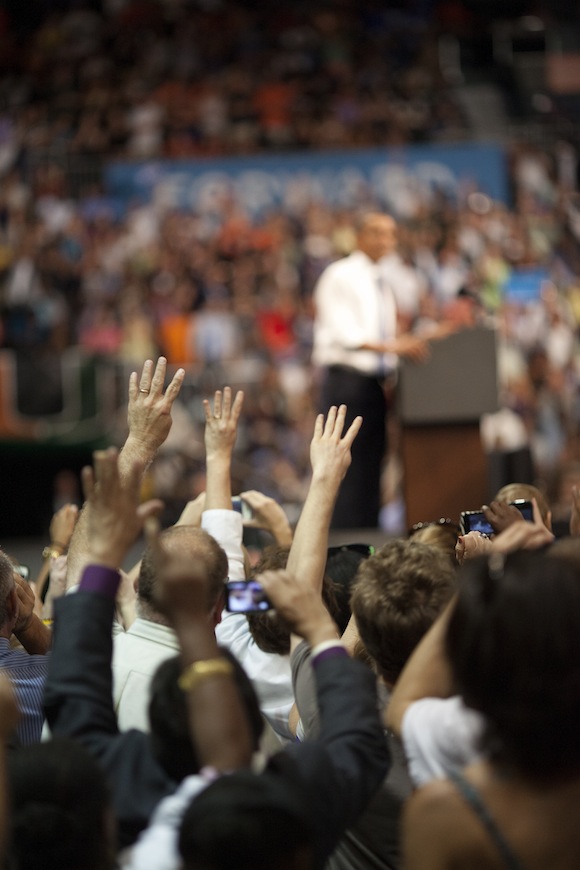 A standing crowd holds up a hopeful four fingers towards president Barack Obama as they hope for four more years of his administration.

From the start of the event, the crowd had already established their reigning chant: “Four More Years!” Congresswoman and Democratic National Chair Debbie Wasserman took the stage and rallied the crowd together in support of the president, while accidentally sparking an unprecedented cheer rivalry between students from UM and FIU. 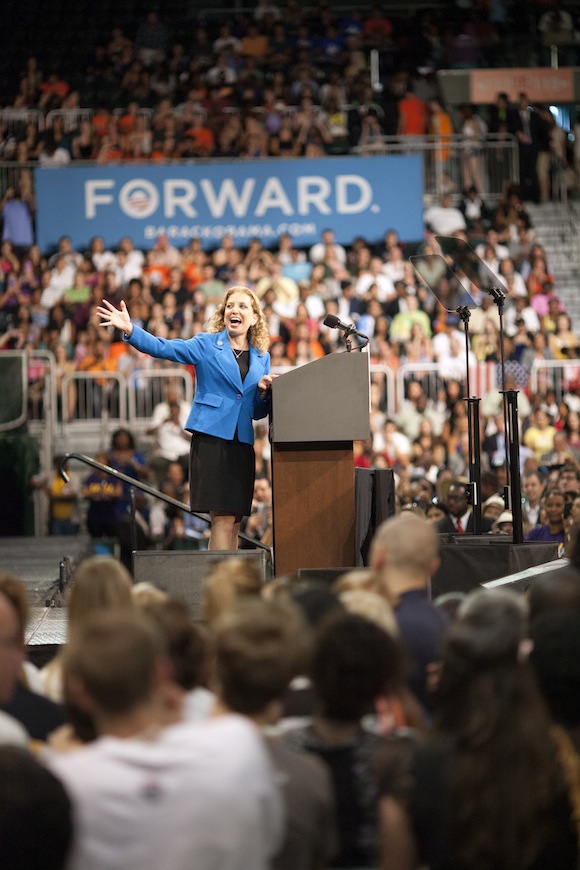 Congresswoman and Democratic National Chair Debbie Wasserman excites the crowd with her speech before President Barack Obama takes the stage.

But it wasn’t until Senator Bill Nelson stepped onto the podium that the event took a more degrading tone towards the opposing party. He established a good point, stating that the genius of politics is compromise, and then accused the republican party of having the inability to do so. He also touched upon Romney’s issue of consistency- how he’s “flipped and he’s flopped,” on issues such as abortion and eloquently predicted that “Joe Biden [would] make minced meat out of Paul Ryan” during the nights debate.

After a brief speech by freshman Lizzie Cooke, President Obama took the stage. As he walked across the runway, the crowd roared with excitement and stayed standing for the entire event. 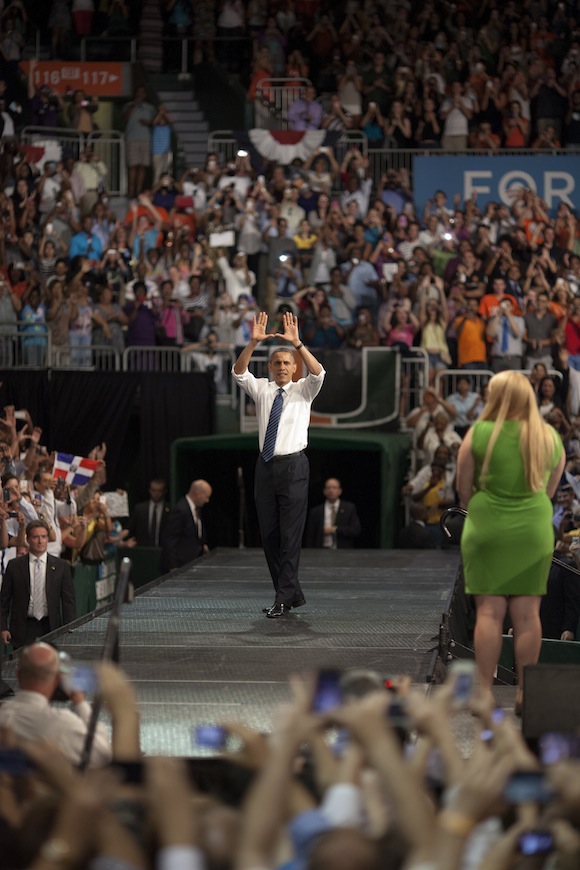 President Barack Obama throws up his U to a roaring crowd of students and members of the community.

The president listed his accomplishments, which include ending the war in Iraq, cutting down taxes by $3600 for middle class Americans, passing “Obamacare,” and repealing “Don’t Ask, Don’t Tell.”

“The last thing we can afford in Florida right now is four years of the very same policies that got us into this mess in the first place,” he stated. “I won’t let that happen.”

Whereas the president kept a calm, lackluster composure during the first debate, he took to sarcasm during the rally, claiming that “Mitt Romney is whatever you’re for.”

He offered the rebuttal to Romney’s arguments that so many were searching for, stating why he believed his opponent’s plan would not be good for this country. He also brought up his views on Romney’s inconsistency, mockingly stating that “After running for more than a year in which he called himself ‘severely conservative,’ Mitt Romney is trying to convince you that he was severely kidding.”

To each point he made, the crowd let out a roaring “boo” to which Obama responded with a powerful call to action, 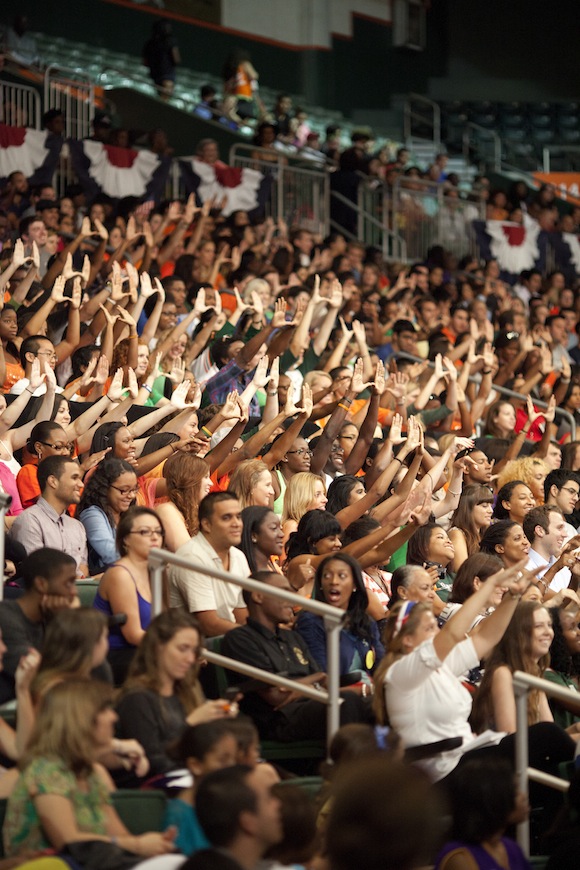 Thousands of students proudly throw up the U as they wait for the president to take the stage.

President Obama brought up the points of his plan that would affect the students and citizens of Miami most, namely immigration policy, education and the creation of jobs. In regards to education, he plans to recruit more math and science teachers and lower tuition costs. The president also intends to place focus on his energy strategy, which he claims will create more jobs.

“I loved when he talked about clean energy. Our world is warming at a fast pace and the other half doesn’t see the importance of this. I also like that he is ending oil company subsidies. Why do the rich need more money?” stated freshman Harlan Pocquette. 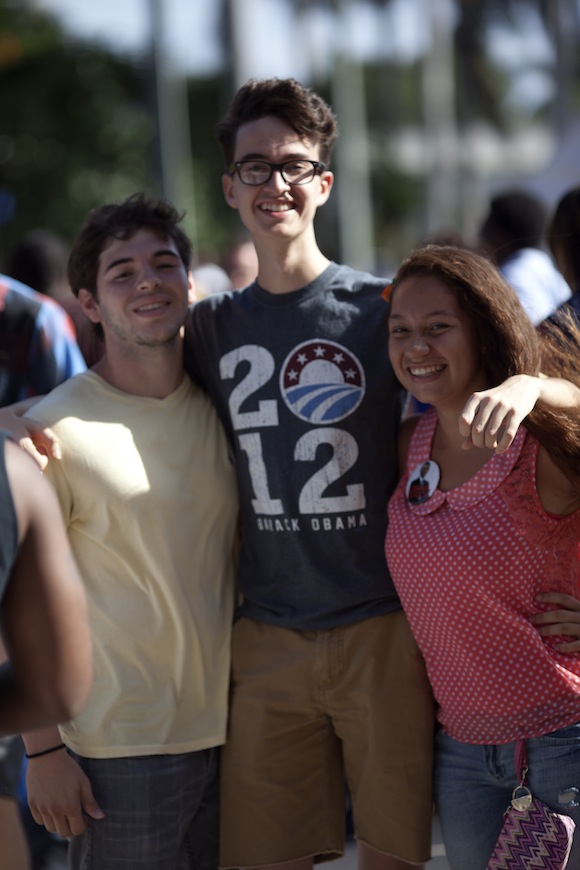 Freshmen Jose Velis, Harlan Pocquette and Maite Torres gather after the rally to share their thoughts about the rally. They were extremely pleased with the president’s stance on the environment and equal rights.

Obama’s recent outreach to the students of the university and the entire Miami community definitely sparked a deeper level of support for the president. And although the rally may not have swayed everyone to shift their vote toward the democratic ballot, it was still an event for the books for those who attended.

“It’s nice to hear first hand what he has to say. This is still a part of history and at the end of the day I support the president because I’m an American,” said junior Kiki Rossman-Reish, a republican here at the University.

Starting October 27th, we have the power to either change the course of this country or move forward with the way things are. The decision is all ours. Our aim within the next few weeks shouldn’t be to bash the opposing party to the ground; it should be to take action, together as Americans. In words inspired by our president, we need to stop booing, and start voting.

Looking Ahead – What to Expect from Last Year's ACC Champions

Q&A with The Buried Life Crew

Watch Out For Watches!