End of an Error: Goodbye to the BCS 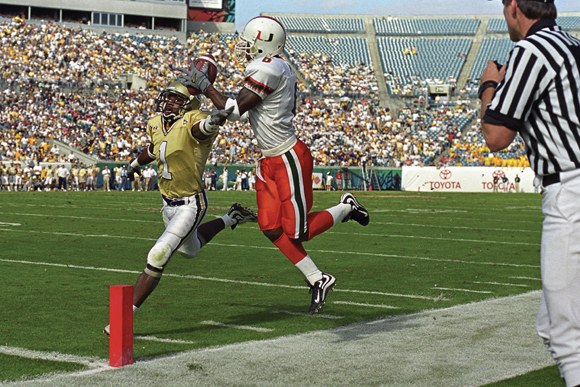 Catching a perfect throw, Santana Moss evades a defender in the 1999 Gator Bowl against Georgia Tech. The game resulted in a 28-13 ‘Cane victory.

It is a known fact that every day at 4:30 pm in Miami, (even on weekends) one road will relentlessly torment South Floridian drivers to the point of insanity. I am of course talking about U.S. 1. Poor layout, out-of-sync traffic lights, and inconvenient, useless construction make U.S. 1 the absolute nightmare it is today. As you lay on your horn and scream things at strangers you wouldn’t even scream at your sworn enemy, U.S. 1 remains an entity that is undoubtedly flawed. There are ways to fix this traffic disaster, but for whatever reason South Floridia officials allow these problems to persist. This is similar to a certain convoluted mistake-ridden system that has plagued college football since 1998. Enter the Bowl Championship Series, or BCS.

Fortunately, after 15 years of mayhem, the BCS has reached its last hurrah. Years of drawn-out formulas and national championship games marred by controversy are finally coming to an end. After this college football season, the BCS is no more; college football fans everywhere are breathing a collective sigh of relief.

Starting next year, college football will complete its move to a four-team playoff system. The four teams will be selected by a committee, much like the NCAA basketball tournament field, with the top seed playing the fourth seed and the second seed playing the third seed. The winners of those two games will meet for the national title game.

Having four teams compete will theoretically preserve the importance of the college football regular season, the best regular season in American sports, while avoiding the mind-boggling late-season situations created by the BCS. Scenarios like Kansas State during the 1998-99 season, when a third-ranked Kansas State team was left out of a BCS bowl game in favor of fourth-ranked Ohio State and eighth-ranked Florida.

The travesties continued here in Miami. In 2000, the Hurricanes were ranked second at the end of the season in both human polls. But the BCS decided Florida State should play in the national championship game despite their one loss coming to, yes, Miami. In 2003, there wasn’t even a unanimous No. 1 team: LSU, USC and Oklahoma all ended the season with one loss. Unable to resolve the situation, LSU and USC were named co-champions in arguably the biggest BCS debacle ever.

These are not the only messes the BCS has created. Ask Auburn, Kansas, Washington, Oklahoma State, Oregon, TCU and Georgia.

The system has been broken for years. Anybody with two eyes and a general interest in college football can see that. The new playoff system, however, will in no way put a stop to the endless bickering. A selection committee could mean plenty of poor decisions — and that will never change — but a four-team playoff is a solution to a broken system which at times anoints undeserving champions.

With the playoff, the teams will finally be able to decide. A fourth-ranked Boise State team can put up or shut up against a top-ranked Alabama. The ACC, Big 12 and hell, even the Big East (or whatever they’re calling themselves now) will actually have a say in the national championship picture instead of relying on their one half-decent team to make a run at the SEC.

This bodes well for Miami. In the years of the BCS, it usually would take an unbeaten ACC team to even receive national championship consideration let alone an invitation (ask Virginia Tech about this one). Now a one-loss ACC team with a schedule devoid of cupcakes (cough, cough, Florida State) can sneak into a four-team playoff. And with less pressure on these teams to go unbeaten, maybe ACC, Big Ten or Pac 12 teams will take some more scheduling risks. Maybe there can be some more inter-conference games instead of beating up on the Georgia Poly Tech junior colleges of the world.

This year will most likely end with a one-loss SEC team somehow leapfrogging an unbeaten Oregon despite the fact that the Ducks just scored another touchdown while you were reading this story. It will be a glorious swan song for a computer system that has pissed off more Southerners than Obama and when the bickering ends and the dust settles, college football will begin a new and improved era where the teams, not a computer, decide the champion.

My First Time: Confessions of a Rocky Horror Virgin