Homecoming Then and Now 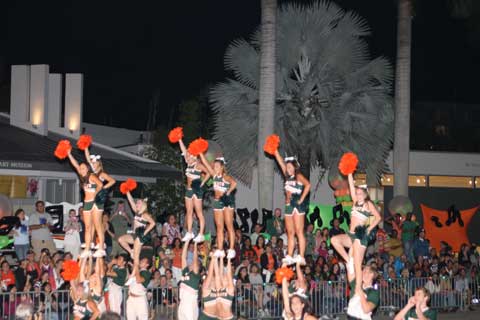 C-A-N-E-S….CANES:The University of Miami cheerleaders rally alumni and students during the the 2009 homecoming parade. This year’s parade takes place on Nov. 5 at 7 p.m. on Stanford Drive and is based around the game of Monopoly to represent the theme “Are you game?”

Inventors of swagger, convicts, Playboy’s number one party school, the most hated team in sports history.Undoubtedly, the University of Miami has had many titles and reputations over the years. So how have all of these names come together to form the campus and student body that is The U? This year’s homecoming motto, “respect the past and fear the future,” echoes what ESPN analysts have been preaching lately: it’s time for Miami to return to its former glory.

The U is one of the most mentioned schools in pop culture: rapper Snoop Dogg refers to “The U in the 80s” in the song “All I Do Is Win” with DJ Khaled, and last year’s release of “The U” documentary on ESPN has only fueled the sentiment. This homecoming season the paint is brighter and the cheers are louder.

Steve Walsh helped immortalize the university with his participation in Billy Corben’s documentary, “The U,” last year. Walsh led UM to a national championship title as the starting quarterback in 1987 when the Canes were poster boys for college football.

“We captured a culture with our dominance,” Walsh said. “It was us against the world for a little bit, then it changed to ‘Wow, this is just a well-coached football team.’”

Before every game, head coach Jimmy Johnson would encourage the team to put on a show for the fans that came religiously to see them, according to Walsh. And so they did just that: put on a show that the whole country tuned in to.

“People called us cocky,” Walsh said. “But, there is something to be said about arrogance when you could back it up.”

This attitude that Walsh helped to define has carried on throughout the years, becoming the school’s claim to fame and prompting the sale of countless t-shirts boasting the word “swagger.”

“Now they call it swagger, [but] we just called it supreme confidence,” Walsh said.

Today, he is proud of the premier university that UM has become, something he said former president Tad Foote always wanted and there’s no hiding the fact that he hopes Miami snatches up another ring soon.

“We watch with pride and ownership, but we set the standard very high,” Walsh said.

“The U,” which was released last December, has had a critical role in connecting an alumnus like Walsh to current students like junior Brandon Mitchell.

Mitchell is the chair of Category 5, the spirit programming board on campus, and he used clips from the documentary to pump up incoming freshmen at orientation earlier this year.

“We turned on the clip of the Fiesta Bowl and said, ‘This is what happened back then, are you going to be there this year?’ That back story really gives them the chills and makes them want to get involved,” Mitchell said.

Mitchell and Category 5 work hand-in-hand with Homecoming Executive Committee to get students involved. Pep rallies are Mitchell’s specialty and the homecoming rally has to be the best.

As a leader in spirit Mitchell swears by Hurricane swagger.

“We were the ones who created [domination], not just going on the field, playing a football game and leaving,” he said.

Swagger isn’t the only thing UM has kept intact since the 80s. Students still know how to party like its 1985.

Sherra Payne attended UM from 1981-1985 as an undergrad and played an important role in planning homecoming events. Tailgates and parties were still part of the agenda back then and homecoming week included many of the same events, like the boat burning, parade, and pep rally.

The always-anticipated concert was also a part of homecoming week in those days. In Payne’s years as a student, UM hosted to musical acts like Jimmy Buffet in 1983 and The Tubes and Men Without Hats in 1984.

Back then, midday events were included all week like a Blimpie sandwich eating contest.

“The first couple of years we used to also have the homecoming parade down Miracle Mile, which was fun because it got the whole community involved,” Payne said.

Payne now helps to plan the Alumni Weekend, which coincides with the homecoming game.

“My goal is to bring back 100 alums to campus to participate in the pep rally and boat burning,” she said. “There will always be a bond. We will always hate the Gators and we will always despise FSU.”

Fast-forward thirty-something years from the parades on Miracle Mile to the arrival of Homecoming 2010, celebration of all that The U has been and all it will become.

Uncle Luke’s new song “The U” will soon be blaring from dorm room speakers. Favorite events will once again draw crowds, like the alma mater singing competition, the pep rally, boat burning, fireworks and Hurricane Howl concert. Jimmy Buffet has been replaced with Lauryn Hill and Donnis, but the green will still be in frenzied with anticipation.

The homecoming themes back in the 80s included “Miami is Magic” and “Catch a Rising Star.” This year’s theme asks “Are U Game?”

Junior Casey Crist, a member of the UM Cross Country team, has no intention of taking it easy for the festivities. She said she plans on attending all of the events, tailgating hours before kickoff when Miami hosts Maryland, and still have enough energy to cheer the Canes on from start to finish.

“Teams should be afraid to step out on that field when they are playing the Canes, just like in the past,” she said.

Crist and her Cross Country teammates also used “The U” as a pump up play list. They watched the film before their first meet to get energy levels high.

“I hope that every seat in the stadium is filled with ‘Canes fans and that we beat Maryland,” she said.

When students like Mitchell and Crist watch clips of the Fiesta Bowl of 2002 they get just as mad as if they were in the stands that day. When alumni like Walsh and Payne watch the current Hurricanes scale up the rankings, they get just as elated as they did when they were students.

“It’s always fun to share victories with the fans next to me at games,” Crist said. “I may not even know them, but I know for a fact we share one thing in common: we’re ‘Canes for life.”

Tiësto Takes on a New Hobby