If Our Love Of Ksubi Is Insanity, Why Are You My Clarity? 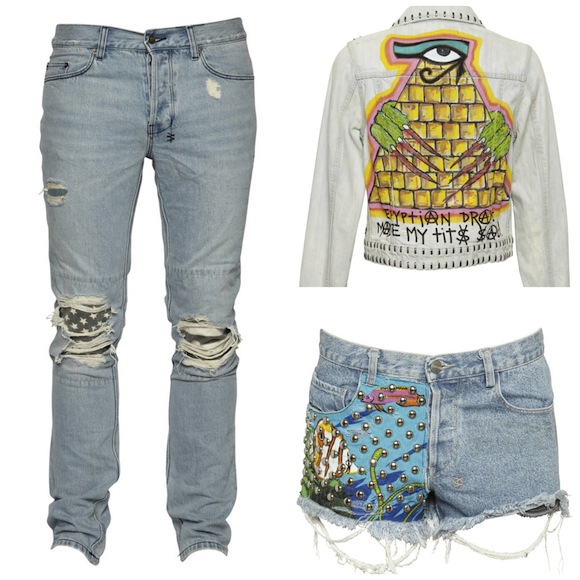 From a country birthing people with some of the hottest accents (hint: Nicole Kidman, Hugh Jackman, Outback) and totally laid back style, it’s only natural that an Australian brand brings us some of the trendiest denim of the season. Forgot those ugly Uggs and shift your thoughts to the true thing that we give thanks for—Ksubi (pronounced “sue-bee if you’re an American or “soobie” if you have a sexier Australian accent). No one does it like the Outback. With six stores in Australia, a store in the famous Soho district, and products in boutiques around the world, Ksubi’s mix of street style cool combined with a little bit of that Aussie laid back beach style appeals to the masses.

Denim all over? Ksubi proves it can be done as their Spring 2013 style showcases tucked in denim shirts, into more designer denim pants, finished with a denim scarf and even a denim baseball cap. Even flower and palm tree patterned denim graced the runway with that extra Ksubi touch of chunky ankle palm tree patterned denim sandals. So much denim, but Ksubi manages to pull it off. And don’t even think that we can talk about Ksubi without mentioning their custom denim. From custom, or shall we call it Kustom, denim and leather graffiti jackets to asymmetrical cut out skirts, Ksubi has taken denim and turned this typical trend on its head. With extra special touches like fabric treatments, studding, and shredding, the Kustom Ksubi takes denim to its max. Only a denim genius could possibly imagine the above the knee denim skirt with a daring front slit, the “trashed” boyfriend jean (omg we’re drooling), and the Lobster Skinnies that do wonders for your booty and draw all eyes on you. So we’re on a trip—a denim trip that is. We can’t get enough of those Aussies or a brand that is very close to our denim covered hearts.

End of an Error: Goodbye to the BCS