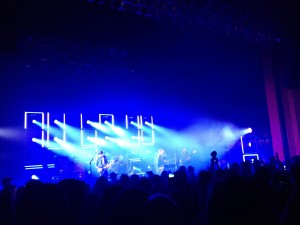 This past Friday, Metric returned triumphantly to Miami. This time, it was to perform at The Fillmore Miami Beach.

Following a mellow and harmonious set by the opening act, Half Moon Run, Metric opened their show with “Artificial Nocturne”. This song captured the aloofness of the electronic era Synthetica captivates. Emily Haines has been quoted saying her new album, “[Is] about what is real versus what is artificial”.  The first songs the group played embodied this concept.  The artist led the audience through an unstoppable wave of excitement; the audience joined her as she beat her fists in the air during “Help! I’m Alive”.

The light show was sporadic at certain intervals, then it seemed to match the beat of the drums during “Sick Muse”.  Metric delivered a compelling performance; the music continued to escalate as each song was sung louder.

The last time Metric played in Miami was during an outdoor beach show for Art Basel.  Haines mentioned the event and told her Miami audience that the energy she felt after that performance convinced her and the group to continue touring.

Emily Haines told her energetic Miami fans, “You make your own night and right now, you are making this the best show.” The crowd filled into the pit and scattered throughout the auditorium seating. Haines ended the show with a “good-bye lullaby” of an acoustic version of “Gimme Sympathy” that allowed her audience to sink in the experience.

Places to go if you love…

Try to Save Her at UM's Screamisodes