Is It Still Juicy? 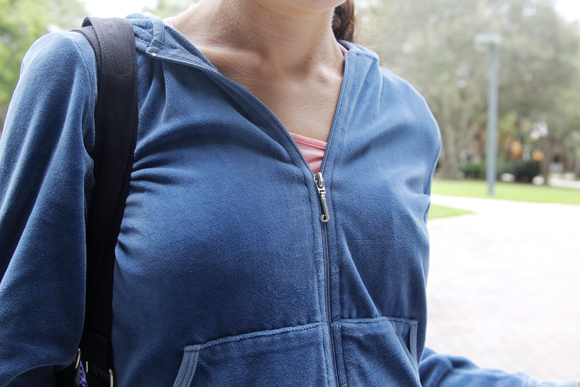 A few years ago, the must-have for celebrities, teenybopper trend setters, and MILFs alike was head to toe velour.

Cute, trendy, and comfy – what more could girls have asked for as self-conscious, angsty high school teens? Yes, we are talking about that blinged out J on the zipper – Juicy Couture. Alas, have the Juicy days come to an end? While the young at heart (yes, we’re talking to you mom) will still rock the occasional Juicy for a long airplane ride, Juicy lost teenage hearts what seems like eons ago in fashion time.

From boasting it was made in the glamorous USA to moving its manufacturing to Vietnam, the sale by its parent company in September, and the ultimate closing of its prime 5th avenue flagship store, some wondered if Juicy was ready for the final nail in its coffin.

But, like Britney, Juicy is hoping for a second chance at fame and one last chance for a revival of its exorbitantly priced tracksuits; the purchase of one will pay for a semester of books. However, skeptics wonder how Juicy will fare with its new line of sweatsuits sold at Kohl’s. Yes, you read that right.

Beginning this year, Kohl’s is the sole seller of Juicy Couture. We have to wonder if Juicy can appeal to this entirely different target market and if its major loss of fashion cred, despite its appearance at the famous NYFW, will make this season its last.

Throwback or throw away? It matters if you buy it!

Try to Save Her at UM's Screamisodes