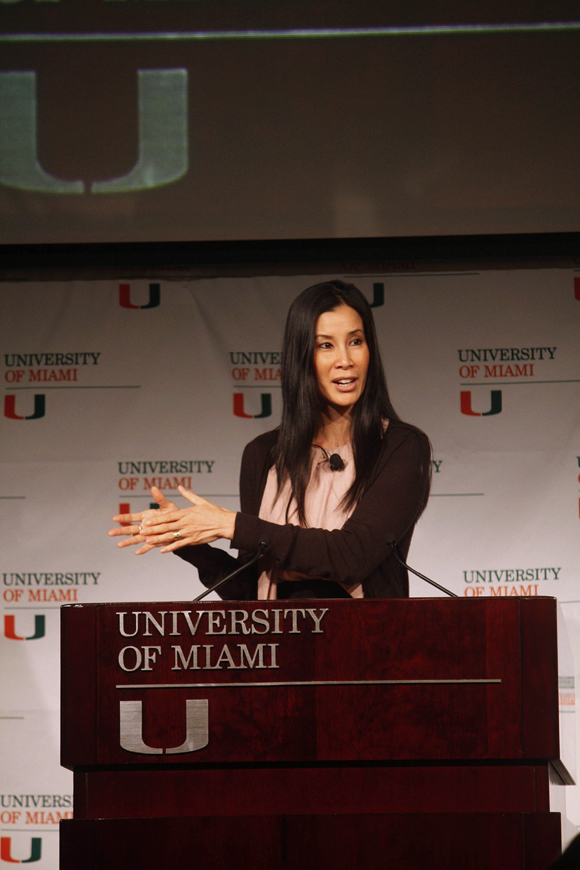 At this year’s fall convocation themed “Open Heart, Open Mind,” a full audience of UM students, faculty and Board of Trustees listened to acclaimed journalist Lisa Ling’s inspirational experiences that awakened everyone’s curiosity and sense of passion. Beginning the conversation with a loud “Congratulations on beating the Gators,” Ling explained how she got started at the young age of 21. Just legal to drink, she was already covering the civil war in Afghanistan. She then goes into the rest of her travels, her career as a journalist and what it means in today’s world, specifically to UM’s aspiring students.

But before her formal address, Distraction and other UM media outlets enjoyed a private interview with Ling herself. With the notion out there that journalism is a dying field and social media has little credibility in the news world, Ling gave us the words to put those notions to rest. “I think that there are more opportunities in journalism now than ever before. If you are truly passionate about telling stories and you are a sponge that likes to soak up information, there is no better job in my opinion,” said Ling. In the age of social media, a single newsworthy tweet by a presumed “nobody” can attract national coverage and give that particular tweeter some celeb status. So we had to ask, does social media take away the integrity of news pieces? According to Ling, “We live in a headline culture. I think young people and Americans are hungry about what’s going on in the world and social media feeds them. Sometimes the catchiest or most salacious headlines get the most views, but there’s no avoiding it nowadays. So if people want to know what’s going on, at least now they have better access to it.”

The slogan “Open Heart, Open Mind” is something Ling not only bases her career on, but is something she lives by and encourages in all others. At the convocation, after a proper introduction from President Shalala, of course, Ling began to open our hearts and minds as well. “I’ve had such an incredible opportunity to explore the world and see things I would not have expected to see,” she said. “So often do we go into things with a preconceived idea and are so quick to judge other people and cultures. What I want to talk about today is how immersing myself in different worlds allowed me to open my eyes and become far less judgmental. We should stop and get to know people because other people’s experiences are so rich.”

At her time at the U, Ling confronted a plethora of different questions. Her answers, however, seemed to have three universal themes at their crux: travel, engage with different people, and write every day.

One, travel: “While you’re young and not encumbered by mortgages or spouses, there is no better time to explore. You don’t even have to leave the country. Miami is such a diverse city and every time I’ve stopped to talk to someone here, I find myself more engaged and open because hearing their experiences is so valuable.“

Two, engage: “I love to engage people in conversation or in debate about things going on in the world. It is essential for people to utilize social media for this. Although not everything is vetted and fact checked, social media has fueled revolutions.”

Three, write: “Write every day. I really think that if you’re a talented writer and have a niche for telling stories, you can be a successful journalist.”

With a Miami Hurricane win this past weekend followed by such a profound address from Lisa Ling, the 2013 UMiami fall semester is bound to be unforgettable.

Although off to a good start, it wouldn’t hurt to take Ling’s advice and make this semester go down in history. So open your hearts and your minds, UMiami, and let’s see where in the world it takes us.

Rant of the Issue: Parking on Campus