Save a Little Green

It’s true that it may not always be cost-effective to be environmentally virtuous on a student budget, but there are plenty of ways to do your part without starving your wallet. With students leading the way, we’re gonna get U green.

We can all agree that the environment has become one of the most important points of interest, not only for students, but for businesses and the government as well. But we also all know that caring is nothing if we don’t take any action.

Leading by example, in 2005 the University of Miami sought out a partnership with Green Seal, an independent, non-profit organization that has helped organizations like the World Bank, the United States government, and the states of California and Georgia to become more environmentally responsible. Through this partnership, the University of Miami has initiated a program called “Green U”, with the purpose of promoting environmentally friendly practices catered to students. 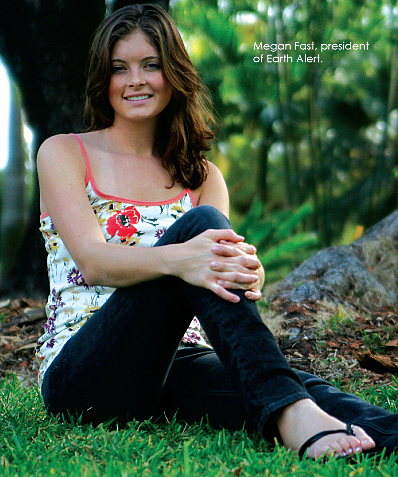 Two of the more noticeable changes are the “Bio-Diesel” fueled HurryCane buses, and the electric powered Segways UM police scoot around on, both made possible through the Green Seal partnership. The University also offers discounted parking passes to students who drive hybrid cars. Most recently, “Green U” has started replacing traditional light bulbs with new compact florescent light bulbs (CFLs), which although cost twice as much, last seven times longer and use less electricity, making it ultimately more cost-effective.

Fortunately, the “Green U” initiative is not alone in its quest to make the school’s campus more eco-friendly. Student-run environmental organizations like Sustainable U, and Earth Alert work under the umbrella of “Green U” to educate and engage students in environmentally friendly practices.

RECENTLY, EARTH ALERT has organized local park and beach clean-ups as competitions between campus residential colleges, which had a very strong showing. Other student organizations include Surfrider, who organizes beach cleanups and educates on marine environmental issues, “Gang Green”, and Greenpeace UM.

But the problem is, without the help of programs and events like these, there would be very little independent initiative to contribute in a positive way to preserving our world.

ACCORDING TO MEGAN FAST, PRESIDENT OF EARTH ALERT, “The majority of students are aware of the challenges we face in protecting our environment, but fixing the problem is not their top priority and [recycling] is not accessible.” And even though for many students, recycling is a priority, there are very few recycling bins, which must be properly sorted and primarily free of garbage before they can even be sent out to recycling. Fast tries to make up for the lack of recycling bins by collecting the bottles she uses throughout the day and carrying them back to her apartment so she can properly recycle them.

Currently, recycling bins can be found in the School of Law Quadrangle, Allen Hall, Memorial Building, Cox Science Center, and the University Center Patio, and most recently, the school has put additional bins in the Wellness Center. Publix also provides recycling for plastic bottles and plastic bags. Perfect!

WHO’S WHO: UM GREENIUSES
Sustainable U founder and president, Matt Hoffman, is a senior and aspiring law student. Within Sustainable U’s first semester as an official student organization, they successfully held Bottled Water Awareness Day, which allowed students to exchange their non-reusable plastic water bottles, for green, hard-plastic reusable bottles in an effort to reduce the unnecessary amount of plastic that is thrown away each day. They also helped encourage President Shalala to sign the Talliores Declaration (of the Association of University Leaders for a Sustainable Future) and the American College and University Presidents Climate Commitment, both of which represented another major step toward environmental sustainability for our University.

Hoffman says that for his organization, they define “sustainable” as “being involved in activities that maintain rather than deplete the environment.” As a future law student, his current role in “Sustainable U” and in sustainable living just might lead him to study environmental law, and continue to make a big environmental impact with a very small carbon footprint.

AN ACTIVIST IN HIS OWN RIGHT, senior and current Student Government Senator of Engineering, Dylan Connelly has made an individual commitment to being environmentally conscious. Connelly keeps himself well-informed by reading the newspaper and watching pertinent news shows, and has since “started to form opinions, and has facts to back them up”—which is something we should all be doing.

After taking an Environmental Engineering class, Connelly says he “learned more of the behind-the-scenes of how things work, like water and air pollution, and [better understood] how I could change them.”

“I decided that my contribution would be to design buildings that would operate cleaner and more efficiently; buildings that use less electricity and water, while at the same time connect you more to nature.” Now that’s Greenius.

As introduced earlier, junior Megan Fast is the president of Earth Alert. Fast grew up enjoying the outdoors with her family, so her understanding of the importance of preserving our environment is deeply rooted.

“I GREW UP KNOWING ABOUT RECYCLING— it was something that I thought everyone did—when I got to high school and college I was shocked that not everyone [else did too]!” says Fast. Now as an Ecosystem Science and Policy Major, she focuses both her studies and her personal efforts towards the betterment of our environment, taking 5-minute showers, and keeping her recyclables until she finds the appropriate bins. But what she finds most important is the power of knowledge.

“I think one of the best ways to protect the environment is to teach children. They are the future, and they will be the ones to decide what happens to the environment.” Fast hopes to someday become an elementary school teacher, and continue to make a positive impact in both the environment and young people’s lives.

One aspect these three green-minded individuals can’t stress enough, is how important it is to know why and how to make a difference for the cuase.

“It is a slow-moving process and requires a lot of education,” said Connelly. which is continuing to be ever-important.<<

That's So U: How 'Canes Do Fitness