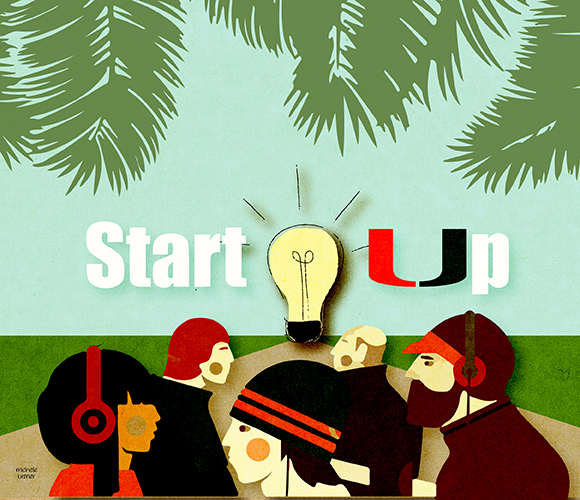 Why find a job when you can invent your own? Multiple Hurricanes dive into the evolving start-up scene and integrate technology with entrepreneurial ventures.

In a new era where babies can instantaneously figure out how to work an iPad, technology grows to be the backbone of society and business. With the explosion of digitally-based companies in the past decade where businesses like Snapchat get $3 billion dollar buyout offers, the possible reward of a successful app is highly lucrative.

While Silicon Valley is known for its booming startup scene, Miami, as a city, is starting to develop a tech culture that encourages an entrepreneurial spirit as the nexus between North and South America. In the past few years, over one thousand start-ups have launched in Miami, many with founders who can call the U their alma mater.

David Capelli started his own company, Illepac Innovations.With Illepac, Capelli specializes in “new technology communication systems for airports and schools, new product development, and consulting for new innovative start-ups by generating, facilitating, and implementing plans”. A current senior in the school of business, Capelli fused technology and communication to streamline communication systems, combining multiple disciplines into one business. Passionate about interdisciplinary combination that can come together to promote entrepreneurship, Capelli furthers his entrepreneurial ventures by recently creating The Hub with fellow students Ansh Grover, Emilio Issa, and Elnaz Moghangard. The Hub is described as an on campus entrepreneurship initiative created by Miami students for Miami students. It aims to link its external connections to help University of Miami (UM) students become innovators with a unique three-step action plan.

“We want campus to be a place that fosters such creativity and professionally autonomy in a one stop location, engaging the forward thinkers and doers on campus and empowering other students to take an idea or dream and make it a reality,” Capelli said.

The Hub also emphasizes its interdisciplinary nature by bringing together multiple leaders from various clubs in diverse academic fields into one physical space to share ideas. It encourages students of all academic backgrounds to take part in its efforts to instill an entrepreneurial attitude within all veins of the campus. Within the Hub, there are leaders from UConnect, an undergraduate research organization, UAid, a Public Health organization, TAMID, an Israeli-oriented investment club and the Entrepreneurship Association.

A new organization, The Hub hopes to heighten its presence on campus in the near future. Its mission encourages University of Miami students in all fields beyond business and technology to look towards changing the traditional norms of business through the channels of entrepreneurship.

“UM is far more entrepreneurial and cultural than other top schools…” Capelli said. “No other school has what UM offers and no other city is booming. There will be 300 million new tech uers in the next five years from Latin America. The incubators are being built in this city at an alarming rate- but what about the students?”

Miami’s technology and start-up scene has experienced a rapid growth, catching the eyes of major business news sources like Forbes and Wall Street Journal. By establishing the Hub, Capelli hopes to enhance the start-up sensibility in UM students as the technology scene in Miami grows, saying that this organization is one that “develops students into innovators instead of manufacturing innovations.”

An app that allows individuals to share various content they enjoy to the people they care about the most, Splyst earned its name from the word “spliced,” which means connecting by interweaving strands together. The CEO of Splyst, Travis Montaque, is a recent alumna who graduated in May 2014 from the University of Miami School of Business. Montaque came up with Splyst during his sophomore year of college, where he utilized University of Miami’s Launchpad on campus to first “get the idea rolling.”

“When you start, you’re excited but at the same time, you’re a little lost as in how you start,” Montaque said. “The hardest part is figuring out what to do and the things you don’t know.”

During his junior year, he finalized his team members and began to create the mobile app in December 2013. As a finance major, Montaque knew little about the technological aspects of creating an app, such as coding.

“I surrounded myself with individuals who had that skill set who helped me learn more about what we as a team were dealing with,” Montaque said. “You want to get a bunch of people while making a start up and my biggest task was to find the technical talent.”

While Montaque was highly appreciative of his University of Miami education in business, he explained that many intangible skills are needed for a successful start-up such as leading a team, making good decisions and exploring a new industry.

After graduation, Montaque dedicated all of his time to Splyst as CEO.

“Start up culture is awesome, but very different from corporate culture,” Montaque said. “Everyone is there supporting the same mission. Everyone is rolling up their sleeves and getting their hands dirty. It’s very team-oriented and not hierarchical, and I think that works better. We have to work like we’re going out of business tomorrow—everyday. You have to work like crazy to get everything done, and the unexpected nature of start up life really makes it fun and fresh.”

The entrepreneurial work that University of Miami students generate reflects the unique, creative, and innovative characteristics of its student body. In this day and age, anyone can create a startup, but creating something that has a tangible potential to succeed or raises awareness for a charitable cause is what sets UM students apart from students at other universities. With programs like the Launchpad and Capelli’s new student-run entrepreneurship initiative, the Hub, University of Miami increasingly becomes a university that prioritizes innovation and the fusion of different academic fields to establish businesses that will succeed. By doing so, UM students prove to be more groundbreaking than other colleges due to its inventive student body as they enter the work force without having to apply for jobs, but having the skills to create their own.

For more profiles on students who have created their own start-ups, read our latest issue, the Social Media issue, available online and on newsstands around the University of Miami campus.

Starbucks and Coconut Milk: Is it Good?

Spring Break Looks: Suit Up or Get Out