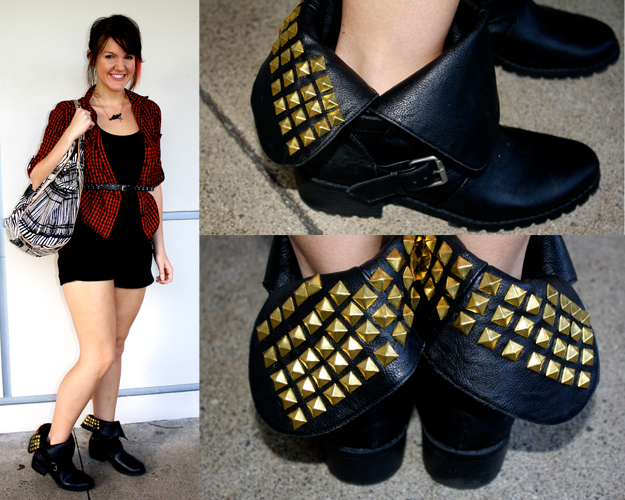 We adored Brianne McKay’s daytime 80’s rock star vibe. A senior from Boca Raton, Brianne is majoring in motion pictures and art. “Punk rock and music in general influence my style,” says Brianne. On this particular day, her outfit is inspired by a music video directed by Drew Barrymore. Brianne enjoys getting creative with her daily outfits, as she likes to adapt vintage or DIY pieces to represent her style. She is wearing fabulous studded boots, which she claims as her very own creation. To give the boots some edge, Brianne embellished them with studs from an incredible collection found at Studs And Spikes. If you love Brianne’s boots as much as we do, you’re in luck because we found a pair just like them on Nasty Gal. Brianne lets us in on another secret to her rock star style by admitting she often looks to The Material Girl line at Macy’s for inspiration. Channeling her artistic abilities to put together edgy and interesting looks, we here at UMiamiMode think there is much to learn from crafty fashionistas like Brianne.

Extra Extra! All Eyes on You – NYFW

The Gentleman’s Guide to Alcohol