Miami escaped an upset with a 27-19 win against the Syracuse Orange!

On Saturday, October 21st, the now 7th or 8th ranked Canes overcame a Syracuse team who was looking for two major upsets in a row to go 4-0 in ACC play for the first time.

Passing & Receiving// Starting QB Malik Rosier again showed why he is on the Manning Award watch list by throwing for 344 yards and two touchdowns. Christopher Herndon had a monstrous game leading receivers with ten catches, 96 yards, and a TD.Rushing //Travis Homer did terrific in his starting debut this year by leading all rushers with 170 yards and a TD.

Turnover Chain SZN// Miami had the chain used four times in the first half, and of those times  Michael Jackson got to wear it twice. When asked if he would get to wear two chains for his second interception he said jokingly, “It would be too heavy[for two chains].” 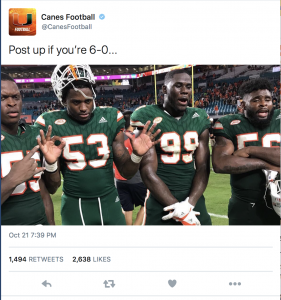 This upcoming Saturday, the Canes will be playing UNC away at 12 pm!

Comeback Comes Up Short for ‘Canes