That Week I Gave Up Coffee 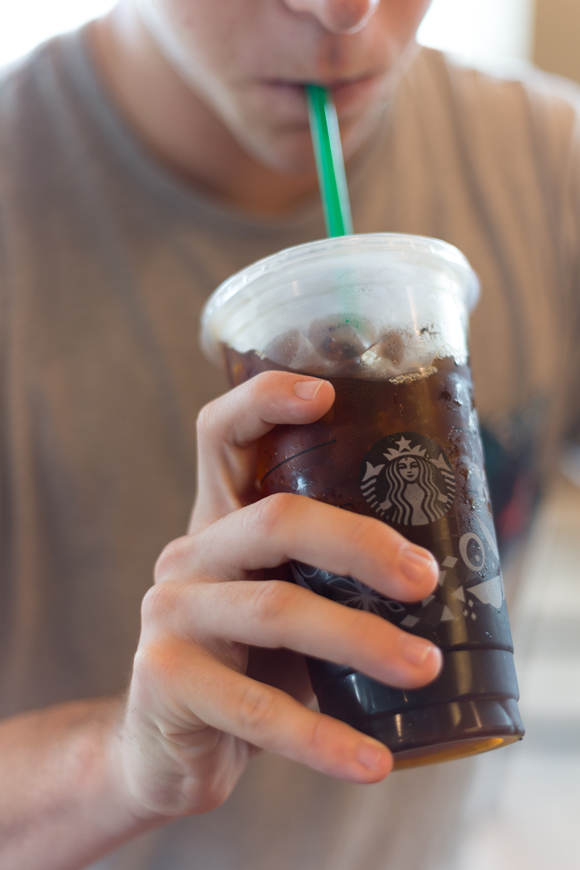 Distraction contributor Michael Valentino gave up coffee for a week and shared his experience:

Last year, the first assignment in my creative writing class was to write a list poem about an obsession of mine. The objective was to choose something that you are extremely knowledgeable of – something that you cannot do enough of. Refraining from the obvious poem about sex, I redirected my efforts to something just as addictive: coffee. I didn’t exactly need my professor picturing me nude as a first impression – unless, of course, she would give me a higher grade. Deciding to cool of a bit on the X-rated material, I came up with one of the lines: “I like my coffee as I like my women,” that being cold, bitter, and Colombian.

I typically order three Venti Unsweetened Iced Coffee drinks a day. It’s the only way I can get through a semester of seven courses and 20-hour workweeks. The funny thing is, I used to hate coffee growing up- the look of it, smell of it, and taste of it, even the mere idea of it. I remember when I was around 5 years old, I took a sip of coffee and almost dropped dead. Not from the caffeine (because I had so much ADHD I didn’t need to be drinking that) but merely from the taste of it.

Then the verbal warnings started coming when I was in high school: “Just wait until you’re in college, you’re going to love it,” my mom would say. “You’re buggin’, Mom,” I’d reply.

Little did I know, human taste preferences change over time. This was an interesting fact that I wasn’t aware of at the time. Before I knew it, my mom was right. I drank my first full cup of coffee during the second semester of my sophomore year and enjoyed it. I needed something to recover from Miami’s WMC and there it was, the answer to my exhaustion. The Messiah. Starbucks.

I drank it so much after that I decided to give it up for Lent, which lasted for about an hour. Well, I recently tried it out again: one full week without coffee. “I don’t need to rely on it,” I thought, “I’m a social drinker, I can quit whenever.”

As dumb as it sounds, I decided to write down a few thoughts in my notebook each day to describe my experience. Since caffeine is a legitimate addictive substance, I also added some famous quotes about addiction to describe each day that I had. These quotes in no way promote or incite the usage of illegal substances.

10 a.m.- Damn, Underground Story was so sick last night. Afraid to check my bank account. What is that laying next to me? Did I get lucky? No, just a pillow. Man, I need coffee so bad. Brunch without coffee is gonna suck. At least there’s bottomless mimosas. The only way to cure a hangover is to keep drinking, right?
4 p.m.- Almost caved at brunch. It was really tough, but I got through it.
9 p.m.- Probably the worst day of my life. Coffee is the only thing that would make this better. Actually feeling withdrawal. Never leaving my apartment again.

Day 2: Monday
“It was the hardest boyfriend I ever had to break up with [referring to crystal meth]”
― Fergie

8:45 a.m.- I almost instinctively brewed myself a cup of coffee this morning. This is one of the most difficult things I’ve ever had to do. Now I have to get through class.
12 p.m.- Why did nobody tell me that this was midterm week? I have 3 exams this week: two on Thursday and one on Friday. I screwed myself. No way I can do this. Hard to see people carrying their Starbucks cups on campus.
5 p.m.- I take back what I said before. I can do this. Friends are starting to doubt me. Gotta prove them wrong. No one would really know if I caved though would they?

8 a.m.- Got to work at 7:30 this morning. Used to think people were joking when they would say not to talk to them until they’ve had their coffee. Today is a light day at work. About to take a stab at studying without coffee. Haven’t done that since sophomore year.
11 p.m.- Tuesdays and Thursdays are my longest days. Ended my last class at 7:40 p.m. Have been at the library studying ever since. No motivation whatsoever. Going home now. Don’t feel like taking these notes anymore.

Day 4: Wednesday
“Every day I ran to that book like it was a bottle of whiskey and crawled inside because it was a world that I had at least some control over, and slowly, in time, it began to take shape.”
― Craig Ferguson, American on Purpose: The Improbable Adventures of an Unlikely Patriot

12 p.m.- Three things pissed me off today: my sister emailing me a coupon for free coffee, stupid questions in class (yes, there are stupid questions), and these two exams that I have to take tomorrow. Hitting the books.

Day 5: Thursday
“Even as a junkie I stayed true [to vegetarianism] – ‘I shall have heroin, but I shan’t have a hamburger.’ What a sexy little paradox.”
― Russell Brand, My Booky Wook

8 p.m.- Just finished class. Had work at 7:30 this morning again. Got an A for sure on one exam, not too positive about the other… Not in the mood to write these things anymore. Too stressed. Noticed I had a free drink reward on my Starbucks Gold Card. Used it to get food instead. I’ve been eating a lot more, but making up for it at the gym. This giving up coffee thing is getting a bit easier every day, though.

Day 6: Friday
“Life is wonderful when you’re the one to write it.”
― Coco J. Ginger

12:30 p.m.- Got a full night of sleep last night. Was actually the best night of sleep I’ve had in a while. Crammed for my last exam while I was at work this morning. Knew almost every answer on the test. Starting to feel a lot more natural energy and motivation. The urge for coffee has pretty much gone away. Feeling more in control of my mood.
10:15 p.m.- Thought for a while that keeping these notes was a lame concept, but it’s really cool to look back at them. A lot has changed this week. Taking tonight to sleep. Work early tomorrow.

Day 7: Saturday
“I stack my money so tall, that you might need a giraffe when you was counting this cash.”
― 2 Chainz (I had to)

12 p.m.- Last night was the most incredible night of sleep I’ve had this week. Probably from working out, hitting up the steam room, eating right and not drinking coffee for the past week. I figured I would feel better after a while, but I can’t describe how different I feel since the week started. Can’t believe I made it the entire week without coffee.
4 p.m.- I calculated how much money I potentially saved this week by cutting coffee out. If a venti size coffee at Starbucks costs $3.16, and I buy three of them a day, that amounts to $66.36 a week. That’s insane. I really doubt that I will completely cut coffee out of my diet, but I will probably be drinking considerably less. Proud of myself nonetheless.

The conclusion? I went back to drinking coffee. That probably surprised just about no one. I’m drinking it as I’m typing all of this up, actually. But I’m drinking considerably less of it.

5 Ways to Take the Stress Out of Finals Week

The Sportsfest Guide for Non-Athletes