The Business of Making a Difference 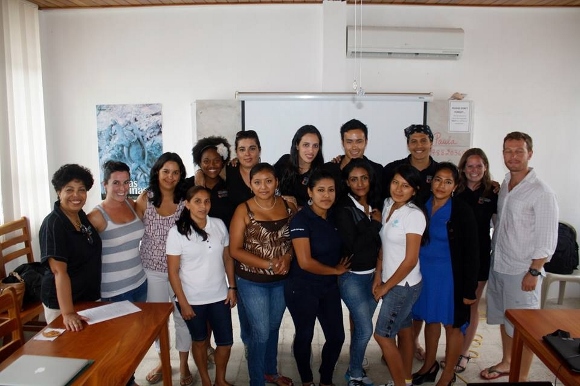 “The mission of Hyperion Council is to recognize the superior qualities and achievements of leaders from the School of Business at the University of Miami. Embracing the values of integrity, resilience, fortitude, excellence, and initiative, each Titan strives to enhance his/her surrounding community through generosity and innovation. Bound by a shared commitment to scholarship and commerce, the Hyperion Council strengthens fellowship between the university and the business communities. The Hyperion Council will flourish through the continued contributions of its members with the goal of building a legacy that will exemplify the standards of uncompromising excellence.”

The Hyperion Council is an honor society in the School of Business that focuses on philanthropic efforts that help at-risk communities improve their business acumen and practices. The council was formed January 21, 2003 by Assistant Dean Ellen McPhillip and four students who felt that high performing students in the business school should be doing more to give back.

It is not an organization that one can sign up for, there is a process. You first have to be nominated by a peer, faculty, or community member. Afterwards students are invited to apply and, after applications have been reviewed, nominees are interviewed by the sitting council members. Candidates are then offered an invitation to join the council. Of the group that went to the Galapagos, the majority of them were inducted during the 2012-2013 school year. When asked why they accepted the invitation, the common response was that it was because of the unique opportunities to serve that this organization provides and the ability to really make a difference in people’s lives. “I am grateful that I got involved because it’s more than just having good grades or getting a job, it’s about giving back to the community.  Giving back has been a great experience that I recommend all ‘Canes do. I also met some really great people that I wouldn’t have otherwise,” said Senior Ana Fernanda Ruiz.

“One of the pillars of the Hyperion Council is social responsibility. The council was founded in memorial of the Titans of industry such as the Rockefellers and Carnegie. Although they were competitive, they were remembered for their contributions. We wanted to carry out our mission of social responsibility. The primary goal was to empower business to control their own destiny and a key was getting them to believe in their businesses.”- Curtis Osceola, Senior

In the past, the council has worked with small entrepreneurs locally in Little Haiti and Overtown and internationally in Jamaica. When people think of students going to the Galapagos, they envision students doing biological research or building houses. But there is more than one way to serve a community, and helping to build a sustainable business community is one of the most important resources that you can provide. “We were originally supposed to go to Haiti but we found out that the University had an existing relationship with the Galapagos through IOI. They invited us to come and offer our skills and so we went. This was the first time that any student org. had ever gone there and transferred skills and knowledge,” said Ellen McPhillip , Assistant Dean of Undergraduate Business Education. 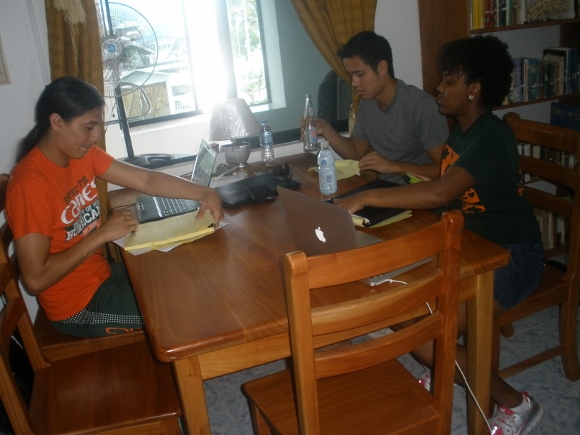 The purpose of the trip to the Galapagos was to provide business consulting and workshops for small business owners, primarily hostels and hotel owners, on the island of Isabella, the largest island in the archipelago chain. Tourism is the island’s major employer and driver of economic growth. This was the council’s second consecutive year in the Galapagos, and this trip built on the foundational skills that had been the focus of last year’s council’s efforts. The council worked with the Isabella Oceanographic Institute (IOI) which coordinates the UM Galapagos study abroad program; the founder of IOI, Johann Besserer, is also a University of Miami alumnus. In addition to providing basic business consulting, the students worked with their clients teaching accounting principles, management skills, and web design.

The workshops and consulting services were needed on the Island because there were basic business errors that needed to be addressed in order to ensure the stability, longevity, and profitability of these businesses. “An enormous amount of cash comes into a very small economy, and there are no institutions that help that cash stick. Cash would come and go without a sustainable benefit to the economy. We helped the businesses adjust their management and accounting procedures because they couldn’t tell if they were actually profitable; they thought all money coming in was profit. For example, if a bill for their child’s school fees came in, they would pay it out of that day’s receipts. If a bill for the business came in, they would also pay it out of that day’s receipts. There was no distinction between personal and business expenses. Also, many didn’t understand the importance of social media. They would ignore the bad reviews because they didn’t understand the impact that these comments could have on business. They got help using social media to enhance and improve customer service and market themselves correctly,”  explained Asst. Dean McPhillip.

Though they were in what many consider to be a paradise, these students were by no means on vacation; they worked tirelessly for two weeks in order to ensure that their clients were getting the best service possible. Despite the long work hours, the Titans did still find time to enjoy some of the things the island had to offer. They took guided Eco-tours which allowed them to visit Los Tuneles’s volcanic tunnels. They also went snorkeling, swimming with sharks, and hiking. One of the sites they visited on their hike was the Wall of Tears which was a WWII military prison post. The Titans also made friends with the locals and socialized with them during dinner or by joining them in playing volleyball. They also visited the beach and did independent exploration in order to appreciate the beauty of the island. 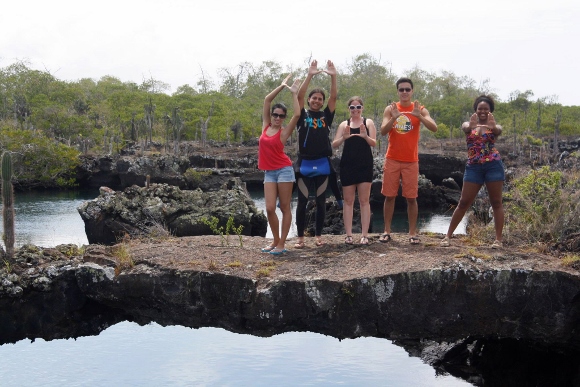 The businesses in Isabella were changed for the better by the efforts of the Hyperion Council because they were given practical tools to help encourage growth. However, the businesses were not the only ones that benefited. There is a learning experience in everything and the Titans came back more knowledgeable about the world and about themselves.

“I was able to see how different it is to live in a small Island with a different political structure. This trip also allowed me to see what a 3rd world country looks like in 2013; there are mainly dirt roads and very few cars so everyone walks and the drinking water is unsafe. The island is very unadulterated and untouched. The majority of the island is a national park and everything just coexists; there is no domestication of the animals, the iguanas and dogs just come and go.  I can’t pinpoint one specific thing that I learned about myself on this trip because this trip wasn’t so much about us as it was about fulfilling our goal of giving back to the community. I did however walk away with an increased compassion for others.” –Jasmine Holmes, Senior 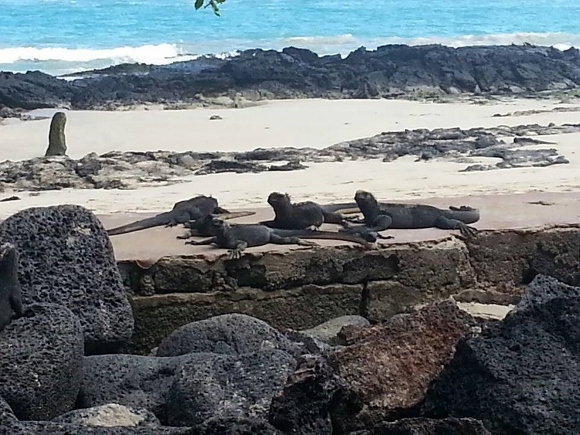 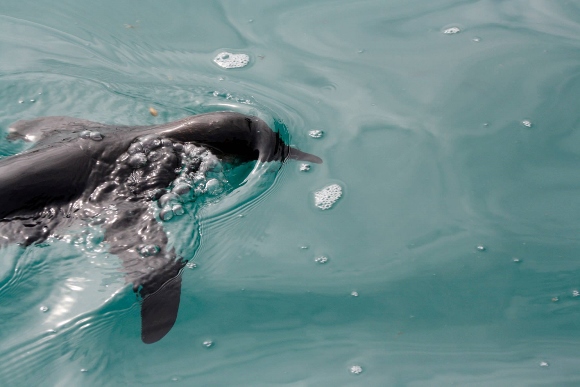 Two examples of the wildlife found on the Island of Isabella.

“I saw that people are willing to be helped and I saw the impact that IOI has had on the community. I learned that you sometimes don’t see the value in helping others. It was humbling how they saw us as the experts even though we don’t have college degrees yet. Don’t discount what you learn in school because it can prove to be very helpful to other people.”  –Ana Fernanda Ruiz, Senior

“There were interesting cultural differences and perceptions on business. For example, there was family all around the business in the Galapagos whereas in the United States it would be considered unprofessional to have family everywhere. Theirs was a more community focused culture and it was hard to inspire competition. From this trip I also gained a greater sense of independence, especially since I extended my trip to work at IOI on accounting project.”– Shannon Nurse, Graduate Student

“My Spanish wasn’t fluent but I could connect emotionally with the businesses and families I was working with which I didn’t know I could do. What I learned most about the culture was that everything is based on the family. Here we are focused on corporations, success, and the dollar but there the family is the center. I am Miccosukee Native American and I found similarities with my culture which reminded me of home and made it easier to work there.  I grew up with the mentality that you go out, work, and make due. You don’t beg, you make due. I heard stories from my elders about not having food, having unclean water, and picking oranges in the everglades for maybe a dollar a pound; back breaking labor. The people in the Galapagos are a proud people who weren’t looking for help but for resources.” – Curtis Osceola, Senior

“I learned that the Galapagos was a market with amazing potential but the locals needed to make sure that they avoided exploitation from outsiders and that they took advantage of their economy. You see a lot in growing markets, outsiders coming in to take advantage, but that’s not always best for the locals or the environment. It was an honor and great responsibility to be able to travel while giving back to communities in need and building the UM reputation. We’ve made a lasting change and we can see the difference from the previous year to now. It was a great project and it was exciting to be a part of it. I learned about my ability in times of stress to focus, prioritize, and work as a team to get things done because it was not like we were in a familiar setting. Also, not all of us were fluent in Spanish but we made it work.”- Alban Harrison, Junior

In addition to interacting with the locals and business owners, they also had the opportunity to meet with some of the leadership. Vice Dean of Undergraduate Business Education, Ann Olazábal ,had the opportunity to meet with the mayor. During that meeting, the mayor offered his support for what the Hyperion Council and the University of Miami were doing; he wants to continue that connection. This meeting allowed both sides to look for ways to further this beneficial and amicable relationship that has formed these past few years. The Hyperion Council plans to continue partnering with IOI to help the businesses in the Galapagos. They are trying to make this experience into a social/entrepreneurship study abroad program. They would also like to start a mentoring program with the young girls in Isabella in order to encourage them to make better life choices. 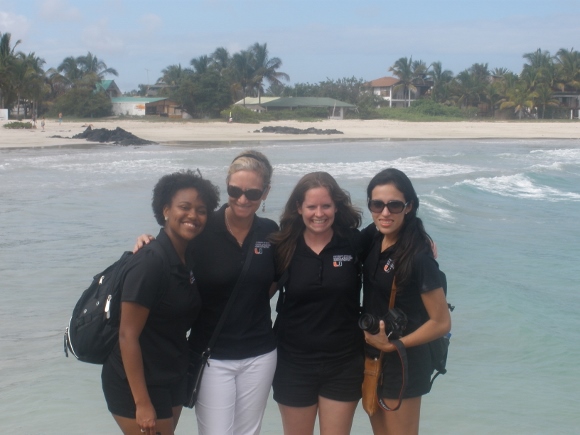 Vice Dean Olazábal with Titans Jasmine Holmes, Shannon Nurse, and Ana Fernanda Ruiz as they begin their time in the Galapagos.

The mission and goals of the Hyperion Council are ones that every student should strive to achieve. Every student has something to offer a community or populace in need, regardless of what they are studying. The greatest resources that can be given to an at-risk community are information and technology that improve their quality of life and push them to move forward to creating a lasting, sustainable community.

To find out more about the Hyperion Council, visit www.hyperionmiami.com.

Salsa and Football on the Campaign Trail

Trader Joe's Arrives in the 305

The Basketball Diaries with Julian Gamble