The Duke of the Gables 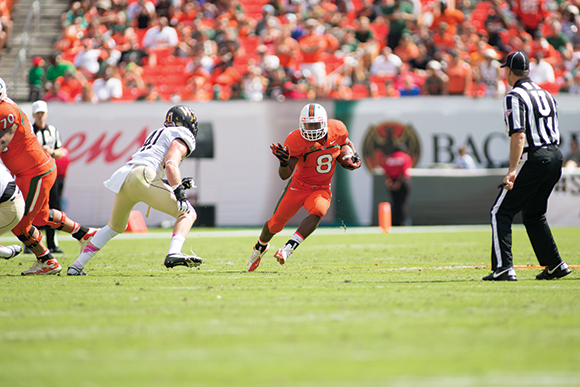 Through the iconic smoke runs number eight. His compact 5’9,” 196-pound frame of muscle is an opponent’s worst enemy and a linebacker’s nightmare. He’s a  hometown hero who takes the main stage at Sun Life Stadium in Miami Gardens, Fla.

The eight ball tattooed on his shoulder and number on his back allude to the game of pool where the eight ball represents the last man standing.

Born with the gift of athleticism, Johnson was named after his late father Randy Johnson Sr. and was nicknamed “Duke” after his maternal grandfather, William Howard “Duke” Coleman.

When his father lost his battle with amyotrophic lateral sclerosis (ALS or Lou Gehrig’s disease), his mother Cassandra Mitchell became the then 14-year-old’s biggest fan.

From a fun, lively kid, grew a talented athlete through the local youth football program.

“My first position was as a linebacker,” said Johnson.  “Then one game, my team needed a touchdown at the end of the game. My coach put me in on offense to run a reverse and I scored. And ever since then, I’ve been a running back. Duke the running back!”

‘Duke the Running Back’ found his superstar stride at Miami Norland High School and led the team to a 14-0 finish and state Class 5A championship in 2011 while earning national attention. Johnson was ranked as the No. 1 and No. 5 running back prospect by Rivals.com and Scout.com—a few of the nation’s major high school recruiting sites– respectively

But what caught the attention of then Norland running back coach Tim Everson was not Johnson’s blinding speed and athletic agility.

“I first met Duke Johnson, he was in the 10th grade, and from that point we just built a bond,” Everson said. “And let me tell you something: he is a class-act kid. He is humble, he is ‘yes sir, no sir, no ma’am, yes ma’am.’ He is that kind of guy.”

Johnson considers Everson the coach he has learned the most from and can always trust him to give an honest opinion, even when it’s not pretty.

When he heads into the locker room after a game, Johnson will have five or six text messages from his former coach waiting for him.

“He gets my negatives before my positives,” Everson said.

For example, Everson once sent something that read: “Hey man, none of the trash talking, get back to the huddle, that isn’t you.”

Everson, the father of three daughters, considers Duke to be the son he never had.

“Every weekend he’s here, and we don’t just talk about football, we talk about life in general,” Everson said.

“I could talk about him all day, he is my inspiration,” Everson, “I’ve been doing this for 26 years, coaching, I have never seen a running back that I fell so much in love with, on and off the field.”

You’d think that being likened to NFL greats Chris Johnson and Willis McGahee, playing all twelve games as a true freshman for The U and having arguably the greatest freshman season in Miami’s history could get to your head.

No sir, not this kid.

The sophomore football star runs for touchdowns surrounded by a stadium-capacity crowd, but gets a little bashful when recognized at a restaurant.

“I don’t think anyone’s seen him throw tantrums, or slam a helmet…those cameras are going to catch everything you do,” Everson added.

Johnson could easily adopt the diva persona that is all too common in today’s sports community. But even when the numbers prove his value, Johnson believes his greatest contribution to the team is far above himself. 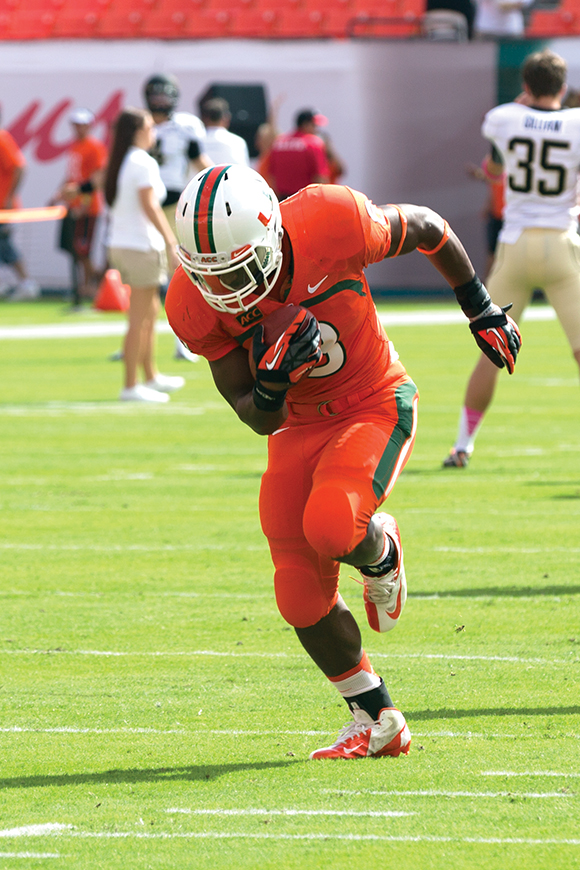 “Just make plays when the time comes, whatever the team needs at the moment,” Johnson said.

While Johnson did not come right out and say it, everyone senses his presence as a leader, beginning with his days at Norland High School.

“When Duke talks, people listen,” Everson said. “He leads by example and everyone knows it.”

Even off the field and out of uniform, Johnson is surrounded by his ‘Canes family.

Johnson has a brotherly bond with the running back group from all the time they spend practicing together. Being a Miami Hurricane is no easy time commitment.

Johnson shares a friendship and a dorm room with Ereck Flowers, his teammate and friend since high school.

The only drawback to rooming with the 6’6” 315-pound offensive lineman?

“It’s kind of hard to move around the room,” Johnson joked.

He shoulders his share of team responsibility in the challenges of the group, never settling for less than the best.

And through it all, he cherishes every minute.

“Everybody has the same mind set and the same goal and the same competitiveness. Everybody wants the best for each other, the team and for the program. So we go out there everyday and do what we have to do, we don’t really concern ourselves with things we can’t control, and we just work hard everyday.”

As of the Wake Forest game, Johnson has accumulated 823 rushing yards, averaging 6.7 yards per carry with six rushing touchdowns.  After the Wake Forest match up on October 26th, Johnson became one of just 19 running backs in the program’s history to surpass the 1,600-yard mark. With 169 rushing yards on a career-high 30 carries and two touchdowns in the game, Johnson passed Chuck Foreman, Don Bosseler and Warren Williams on the all-time rushing list to move to 16th of all-time.

In his first season at UM as a true freshman, Johnson racked up the accolades. Johnson was named the 2012 special teams Player of the Year, ACC Freshman of the Year, ACC Overall and Offensive Rookie of the Year by reputable sources including the ACSMA, ACC coaches, and Sporting News.

But Johnson has more on his mind than just the statistics and the records. As his

mentor stressed, football is only one part of the dynamic young man’s life.

“I always tell him, my job is to make sure you get your college education. I don’t want anything from you except a degree that said you finished college. And what ever happens with sports, that’s fine. But you gotta have something to fall back on. That’s what we always talked about,” said Everson when Johnson visited his Miami Gardens home.

Above all, Everson emphasizes the importance of service over self.

“So you can always give back to the community, any way you can.”

He shoulders his share of team responsibility in the challenges of the group, never settling for less than the best.

And through it all, he cherishes every minute.

“Everybody has the same mind set and the same goal and the same competitiveness. Everybody wants the best for each other, the team and for the program. So we go out there everyday and do what we have to do, we don’t really concern ourselves with things we can’t control, and we just work hard everyday.”

Just take it one game at a time.

Because, sometimes, that’s really all you can do.

Hearts stopped across Hurricane nation when Johnson crumpled backwards on a rush attempt late in the third quarter of the 41-14 loss to Florida State.

With each gut-wrenching replay, the sense of dread and realization grew deeper. 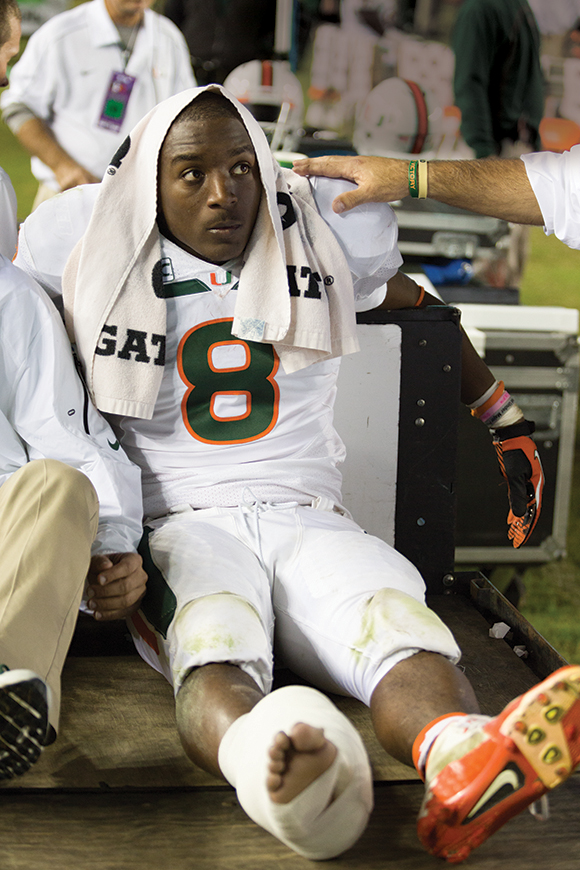 Miami finally released the news that no one wanted to hear – Johnson would miss the remainder of the season with a broken ankle and undergo surgery.

The No. 2 rusher in the ACC and fourth-ranked in the country in all-purpose yards would not return to the field in 2013.

“He has a great personality, he’s resilient, and he’ll be back better than ever,” Golden said.

Johnson is now recovering from his successful surgery. He expressed gratitude to his Twitter following of fans, family and friends:

@DukeJohnson_8: “I really appreciate all the love and prayers that I received over the past week, Thank you I need every bit of it. “

In times of triumph, ability and talent can take you where you need to go. But it’s moments like these, when the true competitor and the will to succeed shine brighter than any learned skill.

Like the tattooed reminder on his shoulder, the eight ball, Johnson will give it all he’s got until he is the last man standing. 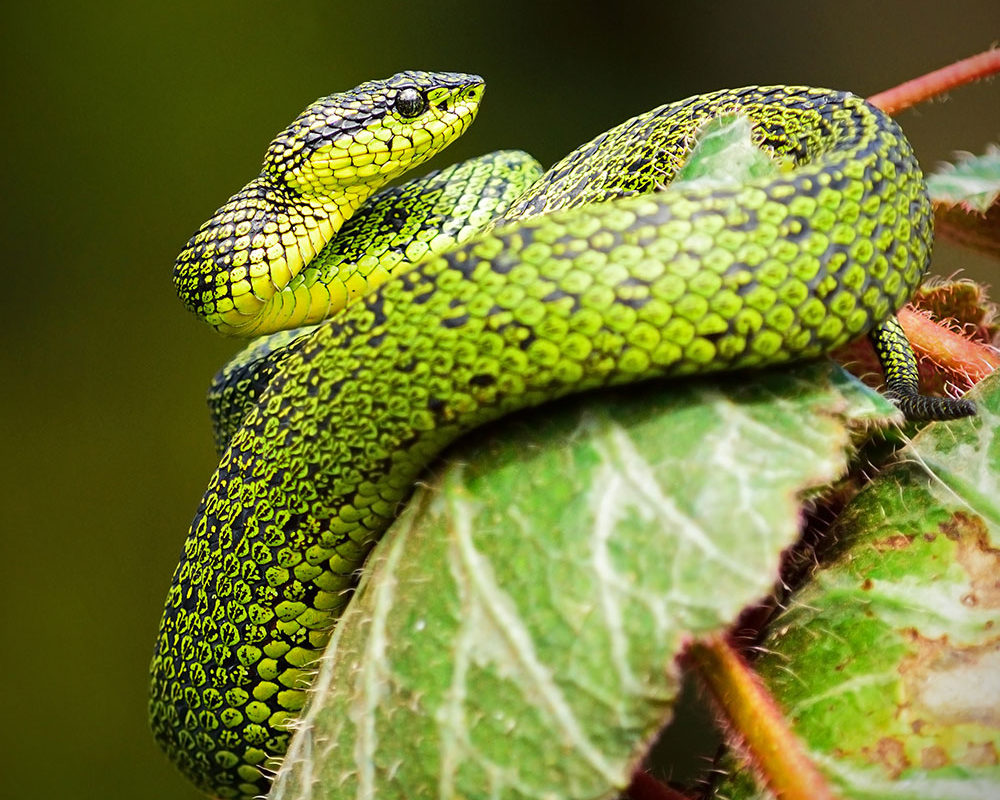 Taking on the Ultra Music Festival 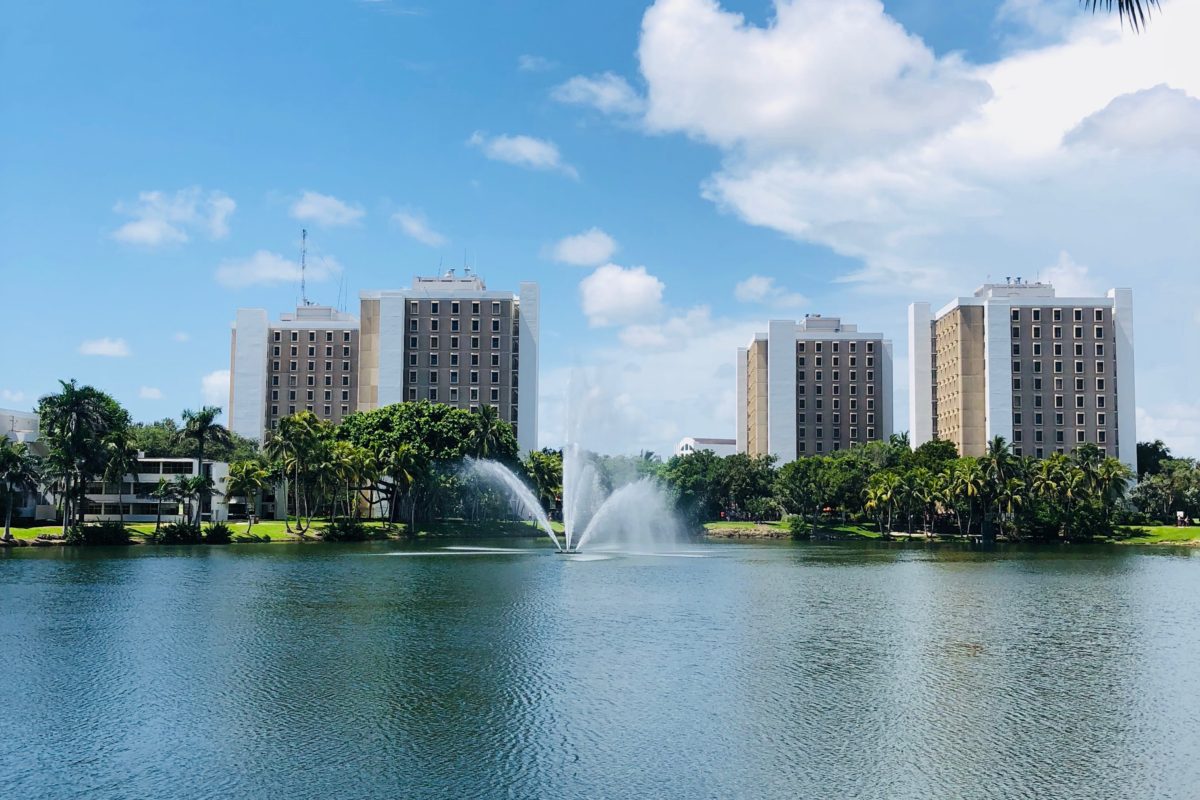