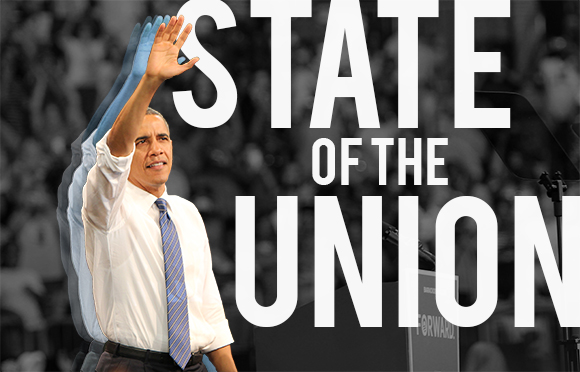 In case you missed it, President Obama gave his annual State of the Union address last night and the theme was “A year of breakthrough.” According to the president, we are doing pretty well but we need to do better. Here is a recap of his remarks:

The Inaction of Congress

“When differences shut down government and threaten the full faith and credit of the United States, we are not doing right by the people.” – President Obama

Of course congress had to be addressed. He chastised them lightly considering how ineffective they have been recently. President Obama didn’t condemn them, but he did make it very clear that he will take executive action whenever possible if Congress refuses to act and pass legislation. He also mentioned and applauded Congress’ budget compromise and said he hopes that the compromise will free them up to think about and work on other things. He asked the members of Congress in attendance, “Are we going to help or hinder progress?” The American public is wondering the same thing.

There have been improvements in education. Current graduation rates are the highest in three decades, but students currently find themselves in more debt. President Obama would like to see this amount reduced so that students are paying their loans with only paying ten percent of their income. He was also pushing to make pre-k more affordable so that all children can have a head start.

Jobs and the Economy

New jobs have been created across various industries. For example, the manufacturing sector has added jobs for the first time since the 90’s. Even though many people are still out of work, we are seeing the lowest levels of unemployment in the past five years.  In spite of these two milestones that prove we are no longer in a recession, President Obama feels that more needs to be done in regards to providing job readiness training. These programs would help match those who are willing and able to work with available employment positions because “the best measure of opportunity is access to a good job.” President Obama went on to say that the country has lost sight of being the land of opportunity and that upward mobility has stalled; more needs to be done in order to help families move into the middle and upper classes.

The president also proposed that minimum wage be raised from $7.25 to $10.10 because he feels that it is not fair for those that work full time to still live in poverty. He would also like to see employers do what they can to increase their employees’ wages for that same reason. Additionally, the average household is unable to save for retirement. President Obama sees this as unfair and added that he would like to see companies help their employees save for retirement.

We are seeing a turn around in regards to outsourcing. Business leaders have determined that China is not the best place to invest but that the United States is. Some businesses are even beginning to insource jobs. Currently, there are loopholes and tax incentives that encourage outsourcing and President Obama feels that both of these need to be closed in order to stop “punishing” businesses that choose to not outsource. Closing those loopholes will make the United States a more attractive place to invest and manufacture, overall.

The country currently has two technology hubs and President Obama is looking to add six more by the end of the year. In terms of our technological innovations, the president feels that we are better suited to face the 21st century than any other nation.

We are lessening our dependence on foreign oil and we have actually seen more oil being produced domestically now than in recent decades. We are also making gains in solar energy. According to statistics given during the speech, someone’s house or business is going solar every four minutes. The country has also seen a strong five year stretch in the agricultural sector.

The wars that our generation have grown up with are coming to an end after 12 years. All troops have left Iraq and the majority are out of Afghanistan. Some troops may remain in Afghanistan for two small missions, to train their troops and to also look for Al-Qaida remnants. The country is also focusing on halting Iran’s nuclear weapons program.

President Obama used this opportunity to talk about the highlights of the affordable care act. Approximately 9 million people have signed up for health care. Also, you can now stay on your parents’ insurance until you are 26 years old, giving students and young adults more time before they have to get their own policies. The new health care legislation makes it so that health care is actually available to all because people are no longer allowed to be denied on the basis of pre-existing conditions. There are also no increases in the rates due to gender.

Two other topics addressed during the speech were voting reform and gun control. President Obama said that they are working on making it so that you don’t have to wait more than 30 minutes to vote. Additionally, they are trying to come up with legislation that will strengthen the Voter Rights Act because the president feels that “the power of your vote, not the size of your bank account, should drive our country.” He would also like to see a compromise on gun control in order to prevent further acts of violence and keep the public safe.
It is safe to say that progress has been made. However, it is undeniable that there is still a very long way to go before the country is functioning at its optimal level.

Brew at the Zoo