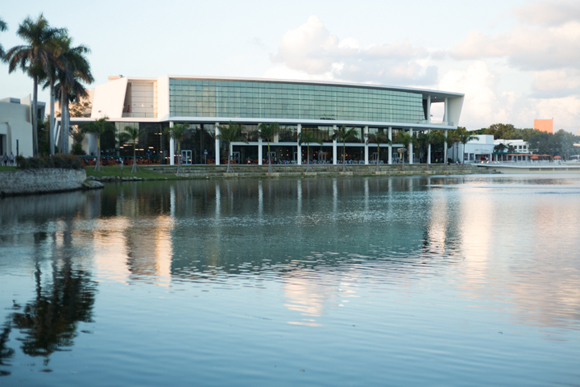 The new Student Activities Center, referred to by many as the “SAC”, has made quite an impression on campus. Popular features of the building include a shiny new Rathskeller, a second Starbuck’s location, a full-size Red Mango yogurt stand, and a wing dedicated to student organization offices. Located on the banks of Lake Osceola, the SAC was intended to be the nucleus of student life on campus. The completion of the project also ends the two-year fragmentation of campus, making the SAC a premier spot simply by location.

“Aside from being just a gorgeous addition to our campus – and a great spot to hang ‘Beat the Gators’ banners – I think the new SAC encourages students to stay connected with campus and fellow Canes” says senior Kristen Spillane. “With the study Lounge, the new Starbucks, and the student offices, I’m much more inclined to stay on campus and meet up with friends and classmates and participate in campus events instead of just heading straight for home after class.”

The SAC is being utilized for all its worth, hosting various student events and organizational meetings. The COSO and SAFAC organizations hosted this year’s Student Leadership Institute in the building, introducing club executive boards to the third floor ballrooms and various classrooms. Students also have the chance to explore the building at Canes After Dark, a new event promoting student involvement that will occur once a month. For more academic or professional venues, the SAC offers numerous conference rooms and will unveil a new study lounge in mid-October.

With so many possibilities, the SAC seems to be a great addition to the UM skyline, but some students are still apprehensive about the center. Laura Pionkowski, a junior biology major, referred to the SAC as “the world’s largest reception area”, noting that she hasn’t seen many places inside the building for students to hang out. “If you’re in a club you may have a desk, or if there is a special event it’s great…but I haven’t seen anyone just hanging out in the student center.” Piontkowski also addressed that the size and newness of the building can be intimidating to students that are just looking to relax indoors. “I feel less of a connection to these new buildings because they are so big and overwhelming. We still only have the I-Lounge in the old UC as a place to go and not get looked at funny if you’re just sitting there hanging out.”

Other students have voiced similar concerns about the lack of purpose for students. One student, who wished to remain anonymous, feels that the SAC isn’t for students at all. “The ballroom was included, supposedly for students to have ‘balls’ but it will more likely be rented out for wedding receptions and things of the like. Just another money making machine disguised as a gift to the students.” Junior Charline Quenée agrees that the building doesn’t quite fit student needs. “The SAC is a beautiful building and looks good on the lakefront but, as far as the inside goes, it seems like the space is meant to be more executive than student-friendly.”

While some students are wondering about the future of the building, many are still exploring the SAC. Freshman Jessi DiPette spent time inside the SAC during orientation events, but admitted that she hasn’t been back much since. One event DiPette noted was Canes After Dark, a monthly event offering students a chance to win prizes, get involved with student organizations, play games, and more. According to Priya Partridge, events like Canes After Dark are exactly what the student body needs to warm up to the new building. “There needs to be more events held there or I’ll never have a reason to go in!” she told Distraction reporters.

With this in mind, only time will tell what the SAC really holds for students. With its central location, popular eateries and the new study area, it definitely has the potential to be a student hub. It seems that the biggest challenge for the university will be getting students through the door.

Spring is in the Hair