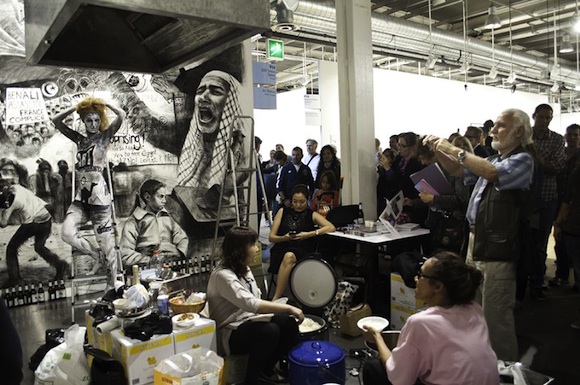 One of the many exhibits at the Art Basel Festival; the artist invited people to cook rice in front of the mural.

With Art Basel Miami Beach, one of the most highly visited art festivals worldwide, around the corner, University of Miami art students have begun preparing for a chance to exhibit their artwork alongside today’s most accomplished artists. Come December, dealers, collectors and connoisseurs will flock to Miami for an extravaganza that has become a pilgrimage for those in the art world. From Dec. 6 to 9, Miami’s beaches and nightlife will take a backseat to some of the most remarkable artwork for the annual festival. Last year, the exhibition drew in nearly 50,000 visitors to the booths showcasing the artwork of over 2,000 artists according to festival organizers.

While the main site is in the Miami Beach Convention Center, complimentary shuttles transport festival goers to the many satellite festivals and events all around Miami coinciding with Basel. Among the satellite festivals are Art Miami, Arts for a Better World and Sculpt Miami.

Last year, after exhibiting at UM’s Wynwood gallery, Cynthia Fleischmann, 24, a photography student pursuing her master’s degree, had her work featured in the Art Miami book. The photograph published, entitled “Leopard Chair,” is of Fleischmann’s friend, whose naked body was her canvas, covered completely in body paint of leopard design. She was photographed in front of a fabric backdrop of the same pattern. “I feel like every background is inspiration and I like how the subject becomes one with it instead of changing,” said Fleischmann. While Fleischmann prefers to work outside, on the day of the shoot it was raining outside – a nightmare for any body paint artist. So she instead turned to household items, such as the leopard fabric, to set the scene inside her Dover, Massachusetts, home.“I like a little spontaneity in my work and not knowing what we are getting into,” said Fleischmann.

Her style, which she refers to as “bodypaintography,” is a signature of hers, and is very labor-intensive; it usually takes her around three hours to paint the body. “It combines my love for the two arts,” said Fleischmann, who studied painting and drawing as an undergrad at UM.

She is fascinated with the ways different cultures view the naked body. “With bodypaint, there is this thin line between it and nudity and sexuality,” Fleischmann said. Originally, Fleischmann had been inspired by the Chilean exhibition “Cuerpos Pintados,” which depicted painted bodies against black backgrounds. In 2009, she too began experimenting with this technique. “It was a result of me getting bored working alone in the studio,” said Fleischmann.  “I am social and wanted to be with other people.” For her first piece, she painted a mural of the jungle as the background and asked her sister if she could paint her body. “I use my friends and family as subjects,” she said. “You have to have a strong mind to be comfortable enough to do it.”

Her sister is a reoccurring subject, even traveling with Fleischmann to the Art Basel in Switzerland to have her body painted in front of a piece of work by Bangkok artist Rirkrit Tiravanija. The piece of work by Tiravanija, depicting the movement at the time on the internet in Siberia and Egypt, served as the background for Fleischmann. After asking the artist if it was okay to incorporate his art as the background, Fleischmann snuck in her paint and brushes past Basel security. “Luckily, for this piece I only needed a few colors,” Fleischmann said.

But Fleischmann painting her sister’s body live at Basel was not the only action going on at the scene of the charcoal mural. Tiravanija’s art is about using the environment to create the piece which is why festival goers were invited to cook rice in front of it as well as draw on the mural. “The piece was growing as the art I was doing on her was growing,” said Fleischmann.

The Art Basel in Switzerland, which is where Fleischmann lived until age 10, is the original, recently celebrating its 43rd anniversary. Art Basel Miami Beach, which opened in 2002, is the only sister exhibition. “It is definitely more of a party at the Miami Basel,” said Fleischmann. “There is a lot of energy and it is a jam-packed week.” Fleischmann hopes to show again at UM’s Wynwood gallery and  to be exhibited in other satellite galleries. “It is a cool thing to be featured as one of thousands and thousands,” said Fleischmann.

Classmate Eddy Lopez, 34, a printmaker, also has been preparing for the exhibitions during Basel and is confident that he has a good chance of being able to show his artwork that week. Standing at an easel in his studio in UM’s Rainbow building, he is hard at work painting an apple – a very ordinary choice for someone who describes his artwork as “weird.” “I just started doing a painting class for the first time in a couple of years,” he explains. “Once I get my skills back, I will start doing the weird stuff.” Gesturing to the horns of bull hanging on the wall of his studio, “This is some of the weird stuff I do,” he said.

The horns of the skull, he said, hung 12 feet of different etchings of women who had been executed or were on death when the artwork was exhibited at UM’s Wynwood gallery. The piece, “The Myth of Dirce,” is named for the original Greek myth of Dirce, a woman who was tied to the horns of a bull to punish her for her crimes. The piece is about the archaic nature of crime and punishment in the United States, said Lopez. “That myth happened in a completely different time and here we are so many years later doing the same thing,” said Lopez.Much of Lopez’s work aims to be a composite of historical and contemporary society. “My work focuses a great deal on social commentary,” he said.

Currently, Lopez is working on screenshots of the Iraq and Afghanistan wars. He reinterprets the work of Francisco Goya, an artist who experienced war in Spain in the 1500’s. Lopez uses different images from the media, such as the front cover of ‘The Economist’ and a screenshot of CNN’s coverage, and develops them into a silk screen piece. “It is all about how we experience your reality,” said Lopez. “Here, you get a very sanitized version of war.”

It is a change from the life Lopez experienced growing up in Nicaragua. He lived through the revolution in his native country before moving to Miami when he was nine. “Like Goya, I experienced war and got to see the power that art has to make a statement,” said Lopez. Lopez always knew he wanted to use art to get others to explore current issues and question how much we have evolved through history. After dropping out of the pre-med track after one semester as an undergraduate student at FIU, Lopez got the chance to pursue his dream and is now in his second year of the MFA program at UM.

Lopez spends eight to ten hours a day working on his art. “You have to be a little crazy to be doing this,” he said, laughing. He is hoping that it will pay off, and that he will be one of the students selected by faculty for the gallery at Wynwood or UM’s booth at the Art Miami festival, another highly regarded exhibition during Basel week. “I would be thrilled to have that kind of exposure,” said Lopez. Until then, you will find Lopez in his studio, smock on and tools in hand.

To learn more about the events happening during Art Basel week and the exhibition itself, visit miamibeach.artbasel.com. To see the portfolio of Lopez, go to eddyalopez.com  and Fleischmann’s portfolio can be accessed at bodypaintography.com.

12 Things to Be Grateful For - UM Edition

Sonia Sotomayor to Speak at the BUC this Friday

YOU CAN'T RUN FROM THE GENIUS OF RUN THE JEWELS