On Saturday, November 4th, the 10th ranked Canes added to their college football playoff resume with a win over their Coastal Division rival. 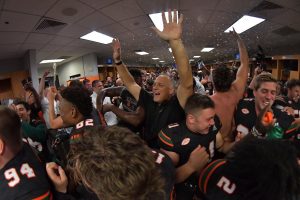 Passing & Receiving// Starting QB Malik Rosier threw for 193 yards with two touchdowns and three interceptions. Christopher Herndon IV led the canes with 61 yards receiving and a TD. Ahmmon Richards added another 57 yards, and Braxton Berrios had 50 yards receiving with a TD and also a pass of 17 yards to Rosier.

Defense // Miami’s defense did a great job holding Virginia Techs explosive offense that averaged 36.6 points per game to only 10 points. They sacked the Hokie QB 4 times and also caused 4 turnovers as well.

Turnover Chain SZN// Miami had the chain used four times in the game. Alex Rodriguez was also seen at the game sporting the chain.

Notes// This week, Miami should see their ranking increase from 10 at the CFP announcement on Tuesday at 7. College Gameday will be at UM for the first time since 2001 as the Canes renew a huge rivalry against the Notre Dame Fighting Irish.The game will be on Saturday at 8 at Hard Rock and will have national championship implications. This is the first time both teams are ranked top 10 in over 2 decades. 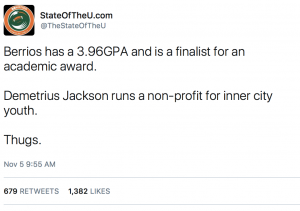 Canes Back Home, Back on Top: Miami Defeats the Fighting Irish