Why Politics Don't Go Green All The Time 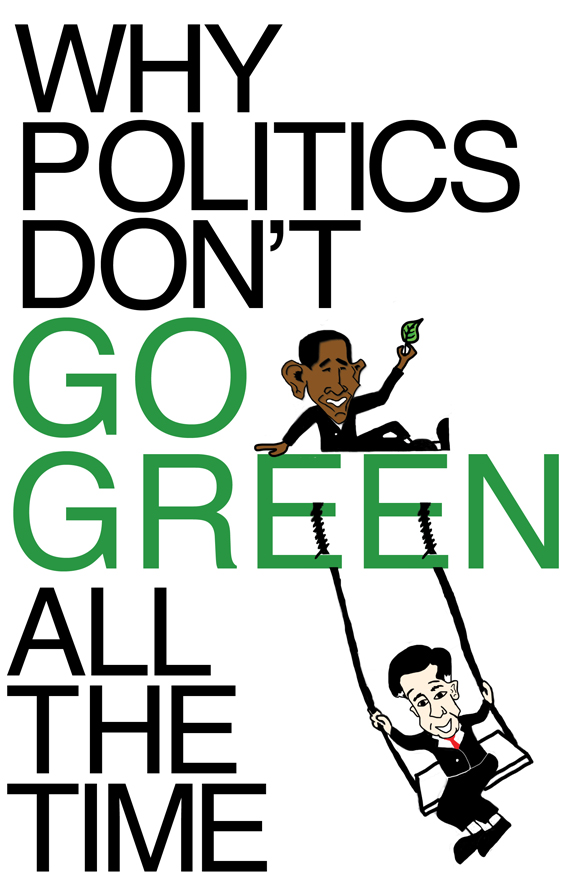 As the 2012 presidential campaign comes to a close, the candidates continue to give speeches upon speeches to eager supporters and potential voters. However, one notable topic has been missing throughout the campaigns: the environment.

Although much of the United States experienced record-breaking heat waves this summer, President Barack Obama made little comment on these obvious effects of climate change. The republican candidate Mitt Romney did not have too much to say either. But did either candidate have any real reason to touch upon climate change?

When President Obama ran for office in 2008, he stressed numerous environmental initiatives, like plans to invest billions of dollars in clean energy, support biofuel technologies, and confront the topic of deforestation. Needless to say, Obama had the support of various environmental agencies. However, in this upcoming election, he is no longer prioritizing discussions about environmental change.

Romney, on the other hand, has been on the fence about environmental issues for years. During his time as governor of Massachusetts, he openly dismissed them. However, as of September 5, in a questionnaire for “Nature: A Weekly Journal of Science,” Romney surmised that climate change is a man-made occurrence. He also announced plans to reverse Obama’s sanctioned halts on areas affected by the BP oil spill from the Deepwater Horizon offshore drilling rig in 2010. To remedy this situation, he wanted to reintroduce oil refineries into the area and bring back business. However, his speech was overshadowed by the Akin rape comments scandal which was given more media prominence at the time.

Even though Obama has had a definite answer to climate change, he has not spoken about his environmental measures throughout the last few months.

It is interesting that Obama has not shared his views on environmental policies as he could have a lot to say. For instance, he could have boasted about the fact that he has lowered the average fuel efficiency standard not once, but twice, and that the United States has doubled its use of renewable energy during his administration. Yet somehow the President did not feel the need to tackle environmental issues. So naturally, Romney decided to bring it up.

In his Aug. 31 Republican presidential nomination acceptance speech, Romney turned Obama’s environmental policy into a punch line. Romney referred to a 2008 speech, in which Obama had promised to slow down climate change by “slowing the rise of the oceans and healing the planet,” and Romney concluded that in the past four years, Obama had failed. When Obama was given the Democratic nomination on September 6, he went out of his way to offer his rebuttal, stating clearly, “climate change is not a hoax.”

To understand the way in which policy makers interact with scientists, Dr. Laurence S. Kalkstein, research professor of Oceanography and Regional Studies at the University of Miami, explained the connection quite simply. As a former principal investigator for the United States Environmental Protection Agency (EPA), he worked on both adaptive and mitigation policies, which involved giving information to the public as well as investigating solutions to slow down the effects of climate change. He noted that in the years since 9/11, funds became scarcer, with more reserves allocated to defense funds and the like. However, environmentalists continued to emphasize the need of taking action to combat these issues sooner rather than later.

English science advisor David King testified in 2004 that global warming “is the most severe problem we are facing today, more serious even than the threat of terrorism… but at the present the United States government is failing to take up the challenge of global warming.” * In a summer similarly imperiled by a heat wave, we are left to wonder if the United States government has tried to find a way to keep history from repeating itself. In taking up the challenge of global warming, research on the issue is the answer, but to search, investigations must be funded.

In response to this growing need for funds, environmental groups have now taken themselves away from primarily being federally funded and have moved to seek for assistance from non-governmental organizations (NGOs). This has taken some of the pressure away from government, although some believe the association should not be lost, at least for the sake of American jobs.

Helena Solo-Gabriele, professor and associate dean for research at the Department of Civil, Architectural and Environmental Engineering at the University of Miami, states that she believes that environmental and economic issues are connected and that that relationship might even bring in some necessary jobs for America’s workforce. She referenced Obama’s visit to campus last year, in which he visited the university’s very own Industrial Assessment Center, as evidence for his support for finding alternative sources of energy. She stressed that at times environmental causes are grouped in with alternative energy, but that the government still cares about addressing climate change. However, what matters the most to today’s voters is finding a job.

She also emphasized that learning how to help conserve the environment requires more workers. In other words, to understand what is going on in the world, researchers have to look at the environment locally and it takes many researchers to take care of the entire country. So If environmental exploration would in turn even add jobs, why aren’t the candidates further accentuating the need for researchers?

At this point, the answer to the question of why both Barack Obama and Mitt Romney have largely ignored discussing the environment in their speeches can be traced down politics. Dr. George Gonzalez, an associate professor of political science at the University of Miami, explained that we are a capitalist society that defines itself by getting people to buy and sell. To do so, our economy needs energy and oil to endure. This goal conflicts with that of the environmentalists. Take, for example, the transportation market: We rely on cars, buses, trains and planes. Although green cars are becoming more popular, we still can’t get from New York to Hong Kong without a gas-guzzling flight or ship. Without oil, we would be stuck.

Whether it is rising fuel costs or an increase in the price of milk, when climate change hits a defining mark, our wallets will know it. We might not be prepared to pay $7 for a gallon of gas now, but in the future we very well might have to. The only thing Gonzalez believes that will wake up politicians to smell the effects of climate change is a catastrophic disaster.

Dr. Christopher Mann, assistant professor of political science at the University of Miami, also believes that it might take the sudden occurrence of a catastrophic event to change the many powerful minds in Washington. However, he brings up a greater issue: not everyone believes in climate change. It is “not a settled issue” in the United States. Rather, Mann defines it as an “abstract concern.” There are some people in Congress who refuse to accept that climate change does in fact exist.

Simply put, Americans are divided into three parts on the issue of climate change. In 2011, a bill was sponsored to overrule the EPA’s findings that greenhouse gases are potentially dangerous, which passed in the House. The Senate then rejected the bill. This matter highlighted the fact that climate change skeptics still exist. Unmistakably clashing with reputable science, these cynics believe in normalcy and refuse to admit that they are living in a changed environment. They might not feel the difference of a year being ten degrees hotter than the last but even with the obvious increasing emergence of powerful natural disasters, climate change may be indeed occurring and a call to action on this issue should be in order.

To the far left of the doubters and “abstractly concerned,” are the climate change activists. This group understands that the environment’s situation will worsen if we not do something to change its present circumstances.

All three of these groups will go to the polls in November. Most of the United States sits in the ambivalent category, aware that summers are getting hotter and storms are becoming stronger. Those are the people who think of today, not tomorrow. Although this lack of long-term planning frustrates scientists and environmentalists, there is little they can do the lack of support by the government. The truth is that candidates do not mention the environment and climate change in their platforms simply because it is not a deciding factor to the constituents who will soon cast their vote.

Joseph B. Treaster, professor of communication and John S. and James L. Knight Chair in Cross-Cultural Communication, shared similar insight. As the editor of 1h2o.org, an online magazine, he voiced that there is not an abundance of discussion surrounding environmental issues during this election period, because they are “complex, controversial and unsettled.” He continued, asserting that this election’s themes involve the three main issues: jobs, the economy and healthcare. Basically, the environment doesn’t even have a chance to take precedence.

Yet back in 2008, as Treaster explained, Obama widely discussed environmental themes. He did so because such concerns were in the minds of voters at the time. Only wading into the recession, the job market was not as destitute as it is today. At the time, job creation was not a concern as significant as it is today. Putting this issue back into discussion for the upcoming election is up to the discretion of voters.

As Mann summarized best, “the policy-making world can only handle a number of issues on the agenda.” The challenge of politicians is to find the right issues to bring up and the right words to say today, not tomorrow. For better or worse, though climate change is not considered an important issue now, the general public will have to deal with the consequences, amidst rising concerns from environmental activists and those informed about the issue. 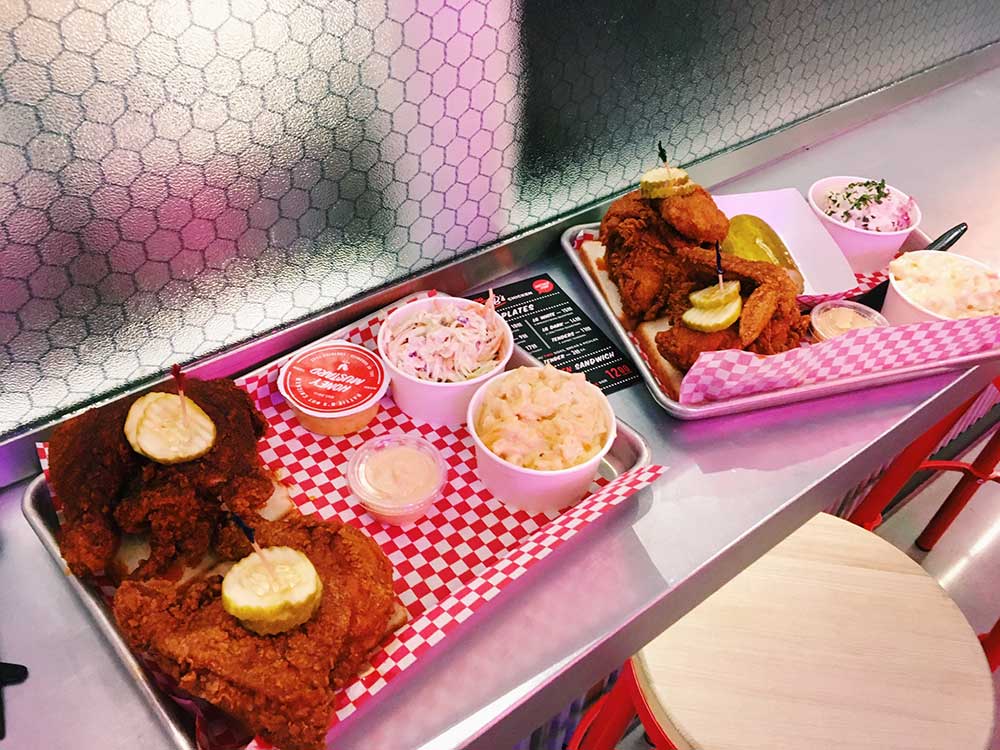 America: Land of the Free and Home of the Fashion Designers