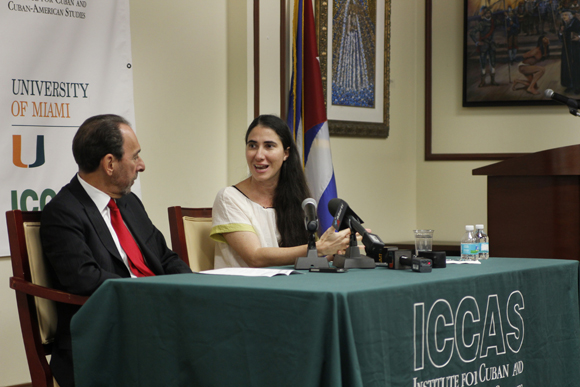 On Wednesday, October 30th, as part of the Certificate Program in Cuban Studies offered by the Institute for Cuba and Cuban American Studies, students and media alike gathered at Casa Bacardi to hear Cuban blogger Yoani Sanchez talk about Civil Opposition and the Use of Social Media. Sanchez tweets via SMS messaging from Havana. Her Twitter bio states she “loves Cuba, literature, journalism and technology.” She lives in a communist country where information is a threat to the government and the first amendment does not exist. Instead of tweeting about food – possibly because they don’t have much of that – she has managed to become a political activist in 140 characters or less.

Sanchez visited the Coral Gables campus as part of her tour in the U.S. Wednesday’s visit was her second at UM. “I feel like this is my home,” she said. Before arriving in Miami, she travelled to California to meet with executives at Google, Facebook and Twitter. It was her dream to visit Silicon Valley. She was surprised by their awareness of her efforts and their willingness to offer aid.

Sanchez is emblematic of the civil society in Cuba, a society apart from the communist government. She has chosen to remain in Cuba because she has a deep-rooted hope that her homeland will change for the better. She graduated in 2000 with a degree in philology; after graduation, many of her classmates fled the country. This is a loss for Cuba. Her classmates were younger and more rebellious, more willing to ignite a change. When these younger people leave, they leave behind an older, more pacifist population unable to bring about the necessary changes.

But to say Sanchez is a citizen of Cuba might be incorrect. Cuba has basically erased this word from its vernacular. “Citizen” is what the police call people when they come up to you and ask for your identification. “I am an individual with rights,” Sanchez said, a sentiment the government would disagree with. Although some people are slowly regaining economic autonomy, they still live in fear of being caught; any extra money is earned in the illegal market. People cannot trust anyone, not their neighbors or friends, in fear that they may secretly be political police.

Sanchez clearly believes in the reconstruction of Cuba, but does she see it as a bottom-to-top change, top-to-bottom or outside source? In the 90s, when times were really catastrophic, she dreamed of the people coming out onto the streets and making a change from the bottom. Now, this dream has changed. However, she does not believe the government will change everything either. Raul Castro, Fidel’s brother and President of Cuba, will introduce an authoritarian model with certain economic freedoms but non politically.

But Cuba, like so many authoritarian governments, has a monopoly on information. There is only one private newspaper in the country, which publishes more stories on leisure and entertainment than political and economic issues. “How can small towns communicate [political] marches?” asks Sanchez. The government has effectively dismounted communication and the people’s ability to unite. “When you live in a country where you know you will never speak into national news organizations’ microphones or have two minutes on the radio, you find other ways [to communicate],” said Sanchez. Her other way: technology. Through her SMS messaging translated into tweets, she communicates to Cuba through a boomerang effect. Though it is uncommon for Cubans to view Twitter themselves, they hear about her tweets from family members from other countries who do. She is working towards becoming a truly effective and trustworthy source of news.

Though her personal project – her blog – has projected her as this source, her next project will solidify her reputation. She has been working on producing a digital newspaper in Cuba with eight other multi-talented journalists. She describes it as a newspaper for the 21st Century; she does not want anyone to pity Cuba by saying they cannot achieve this quality. Her newspaper will be at the same level as any other. Of course, it will remain digital and shared as PDF files; printing would be illegal and stopped by the government. She knows this is a very ambitious project but she is doing this for her country, a country of people who crave modernity and technology.

This modernity, however, is too expensive to attain. Technology is purchased with money, though in the illegal market. A full computer costs about 500 pesos covertibles. The salary in Cuba is about 25 convertible pesos. You can see how the math does not quite add up. There is a disparity between the black and white population as well, with mostly only white people being able to afford to purchase technology.

Like with her last trip, Sanchez will soon return to Cuba. And maybe just like last time, she will have difficulties readjusting. “It was difficult, like any returns. It was like feeling submerged and being unable to breathe. You cannot just go to the corner and buy a newspaper, there’s nothing on TV,” she says of her return to Cuba after her initial trip to the US. But eventually she will take a deep breath, and be back to her life. Her trips have protected her; she no longer gets arrested as before or assaulted physically. Her family helps her. And as she says, others are worse off than she is. Through her travels, she has met other similar women fighting for their own causes. Simultaneously, she has inspired others to think of social media alternatively.

Topshop Crosses the Pond to Nordstrom 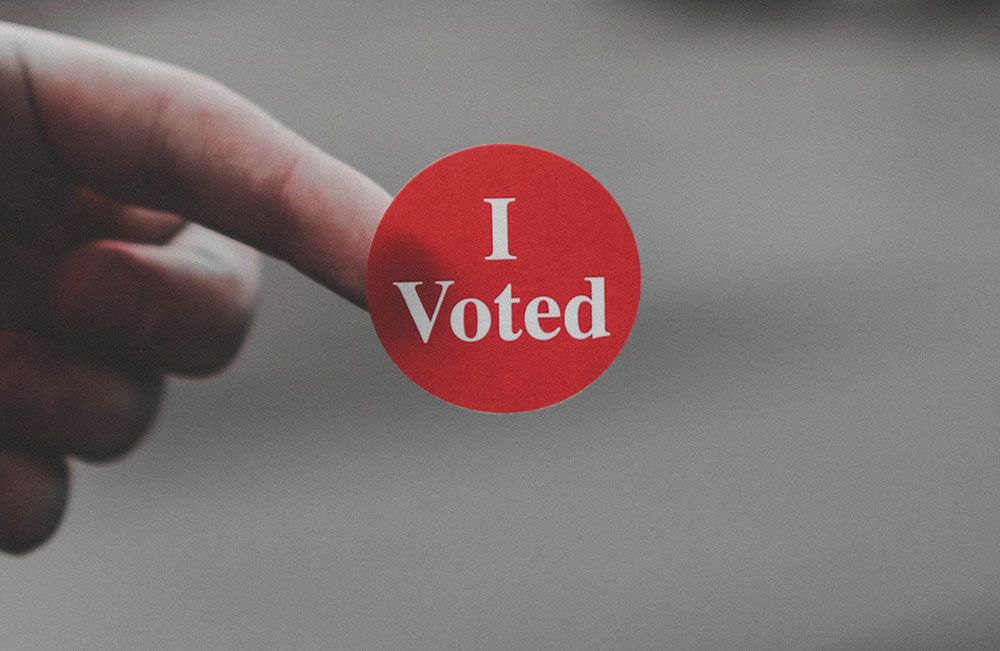 No Rules, No Problem