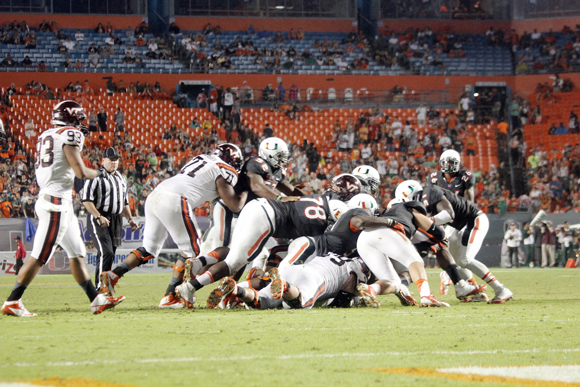 After a tough series of losses, the Hurricanes hope to win the last home game.

On Saturday, the Miami Hurricanes (7-3 overall, 3-3 ACC) kick off at 12 noon at Sun Life Stadium against the Virginia Cavaliers (2-8 overall, 0-6 ACC) for the final home game of the 2013 season.
Despite the heartbreak of three consecutive losses, this game is not about the rankings or the national media attention, but rather the celebration of the 26 Hurricanes taking the field for the final time of their college careers.

Saturday marks the last regular season opportunity for senior leaders to solidify their mark on Hurricane history. Quarterback Stephen Morris is one of only four 7,000-yard passers in program history and will look to continue to rack up passing statistics. Wide receiver Allen Hurns needs 161 yards to post the fourth 1,000-yard receiving season in school history.

Traditionally, the Cavaliers evoke a collective groan of dread from fellow seniors. While the overall series is tied 5-5 overall and 2-2 in games played on Miami’s home field, Virginia has won the last three series meetings.

But this year, at least one thing has turned in favor of the ‘Canes. Senior defensive tackle Justin Renfrow will line up on the Hurricane side of the line of scrimmage. A transfer from the University of Virginia, Renfrow has consistently made his presence felt and recorded a season-high six tackles and a forced fumble against Georgia Tech. Renfrow tied his season record with six total tackles against Duke.

“Justin is a very inquisitive kid, very bright kid, he has brought some maturity there – not just physical, but mental maturity. Whatever ways they parted on, we’ve really never talked about it. It’s always been about what he’s going to do to help us, getting a graduate degree at Miami and all that,” said Coach Al Golden.

Renfrow will end his college career a ‘Cane alongside 25 of his teammates and a senior class of Hurricanes watching from the stands and supporting from wherever their Thanksgiving travels may take them. As Hurricanes, we’ve grown up, discovered our passions, and established a legacy that is all our own, on the field, in the classroom and in the community. Celebrate it together, seniors!

“They stood with us when it was really hard. I know for the most part it’s over now, but there really weren’t many days where they could see the future in the last two years, the last 28 months. Those guys, I’m really proud of them for the way they’ve delivered us through this. They’ve adopted somebody else’s problem as their own. They fought through it, they resolved it and they’re allowing us to move forward now. I just want to make sure everyone in our organization understands how pivotal that was for us, and that we send them off the right way,” said Golden.

Eat Your (Healthy) Heart Out This Food Day

How Many Of You Have Been Personally Victimized By Valentine's Day?

A Look Back at a Sweet Season: Canes B-Ball