Miami Ballroom Breaks Out the Sequins and Glitter 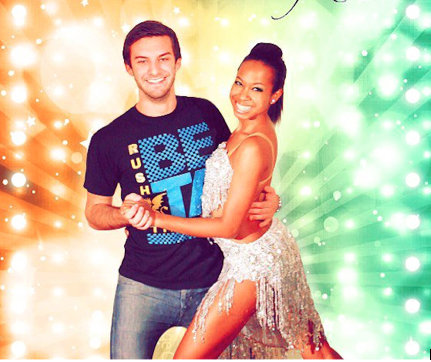 The anticipation for University of Miami’s Dancing with the Stars event has been building since early fall. One of UM’s largest performances, Miami Ballroom’s show is the culmination of months of hard work, countless rehearsals, sponsorships, interesting routines, good lighting and fun costumes.

According to Tayler White, captain of Miami Ballroom’s performance team, the evening will show off ballroom dancing in a new light. Instead of the stuffy, antiquated dances one normally associates with ballroom, White hopes that the audience will think of ballroom dancing as fun and exciting. She promises that Wednesday night’s performance will help people see “ballroom dance like they’ve never seen or thought of before.”

This year’s theme is “Stars of the Silver Screen” and will feature routines inspired by movies like Charlie and the Chocolate Factory and Pirates of the Caribbean as well as guest performances by KAOS, Hurricane Bhangra and the Miami Ballroom DanceSport team. Two professional ballroom dancers will judge the competition along with Dean Ricardo Hall, who competed the year UM Dancing with the Stars debuted.

Dr. Barbara Colonna, an organic chemistry professor and the only faculty member competing this year, says, “The entire rehearsal process was very, very challenging but equally fulfilling.” She is excited to perform and hopes that her extensive practice will pay off.

This is White’s final year at UM and her last run with Dancing with the Stars. She will be performing with Michael Hogan of KAOS. White has been involved with Miami Ballroom since freshman year and has seen the club grow from ten members to seventy. She’s experienced a lot of good things through ballroom dancing and hopes the Dancing with the Stars event will inspire people to come in and try to learn some of the dances performed.

Between all the flash, there’s definitely substance. All the hard work and enthusiasm looks like it will translate into an amazing show. So even if sequins and choreography aren’t your thing, go see the Miami Ballroom pros and the on campus stars compete.

what: Dancing with the UMiami Stars 2013 – Stars of the Silver Screen

Distract Yourself (In Spanish) with Entérate TV