Salsa and Football on the Campaign Trail 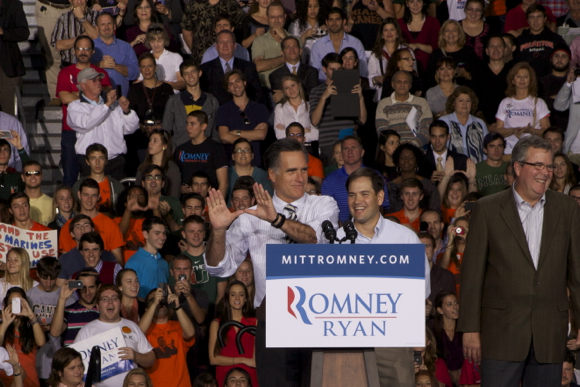 On October 31st, presidential candidate Mitt Romney paid a visit to the University of Miami for the second time while on his campaign trail.

While many students were donning bunny ears or plastic vampire fangs this Halloween, a line of diverse individuals began to collect outside of the Bank United Center. This crowd of about 4,000 was filled with passionate Romney supporters who waited in line for over 5 hours to see the presidential candidate speak.

The seats filled up quickly, as did the buffer surrounding the podium that bore the Romney/Ryan 2012 insignia. While turnout was not as large by the numbers compared to Obama’s recent visit earlier this year, the anticipation was palpable. A salsa band played mariachi versions of well-known ditties like “Beyond the Sea,” and one interesting, lesser-known tune with the unmistakable chorus of “Vamos a Votar con Romney.”

Chants of “USA, USA” and “Romney, Romney” echoed throughout the stands, as signs of “Women for Romney” and a particularly interesting sign that read Salsa and Football on the Campaign Trail were waved in the air.

Country music replaced salsa as Romney walked to the podium. The crowd erupted with cheers of excitement, as the presidential candidate gestured the all-too-familiar “U” with his hands.

Romney spoke mostly of job creation, and stressed the importance of voting in Florida.

“Many of you from the University of Miami here today want to know that when you graduate you’ll be able to find a good job, but right now half of the kids coming out of college can’t find college-level work,” said Romney, mentioning the fact that over 20 million Americans are currently unemployed. 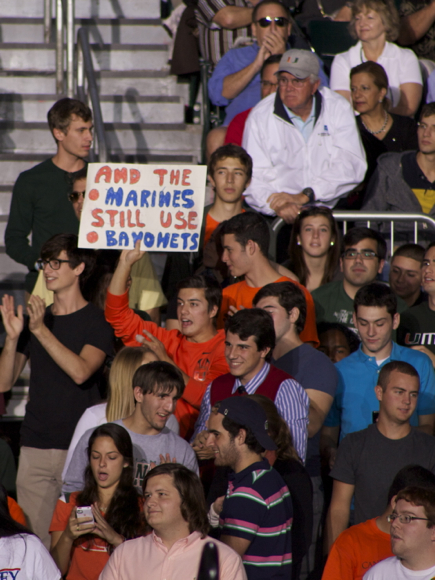 A crowd member holds up a sign referencing a comment made by President Barack Obama during the final presidential debate for the 2012 election.

Romney’s fifth point resounded with the audience as well, many of whom cheered when he promised to champion small businesses by reducing taxes on job creation through individual and corporate tax reform. He also touched upon his plan to replace Obamacare with real healthcare reform that controls cost and improves care. 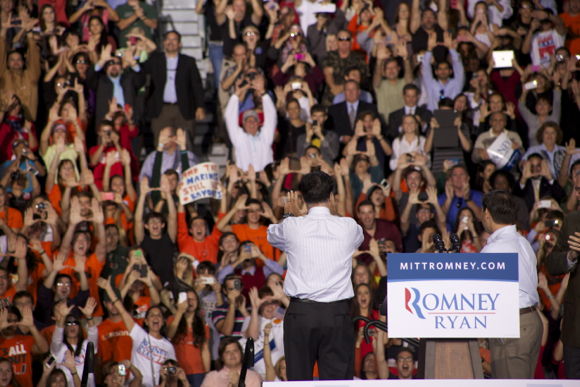 An excited crowd of Romney supporters mirrors the president as he throws up his U.

After outlining his five points, Romney extended his condolences to the victims of Hurricane Sandy and urged the audience to donate to the Red Cross. Romney then asked the audience if they’d “remember a TV show by the name of Friday Night Lights, where a college team had a sign in the locker room that read ‘clear eyes, full hearts, can’t lose’” and cheers of approval began to rise from the crowd. “The players would tap that sign every time before they’d go out on the field,” Romney said, finishing his speech by telling his prospective voters to make it to the polls with clear eyes and full hearts, “so we can’t lose.”