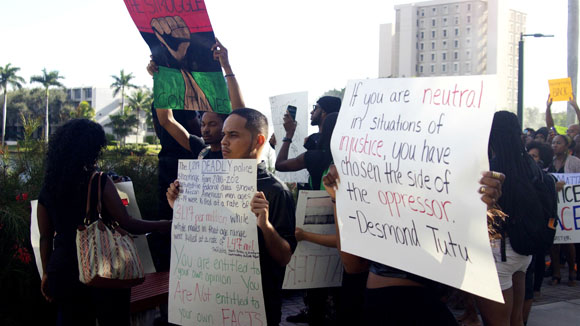 2014 saw protest in major cities and on college campuses, including our own, reminiscent of those during the 1960’s Civil Rights Movement. These protests were sparked by a series of high profile cases that returned rulings seen as unjust by individuals in the minority community.

Two such cases were the Michael Brown case in which Michael Brown, an unarmed teenager was shot and killed by a police officer; and the Eric Garner case in which a man was placed in a banned choke hold by the New York Police Department (NYPD) which led to his death. The Grand Juries in both cases declined to indict the police officers which set off a series of primarily peaceful protest throughout the nation.  Additionally, two NYPD officers were ambushed by a gunman and shot execution style as the man sought what he felt was justice for the murder of Eric Garner. This act by a lone vigilante served to increase tension between the police department and minority citizens.

These acts, the use of what many consider excessive force against unarmed black males and the growing distrust of the police department, are cause for an in depth conversation on race and if we are truly a post racial generation as opposed to a generation that is uncomfortable discussing race.

At the end of last semester, students made the decision to protest the Mike Brown and Eric Garner Grand Jury decisions. The protest included a march around campus and a “die-in” at the Rock. The protest was met with backlash and an outpouring of comments on anonymous sites such as Yik Yak and Umiami Secrets. Some of these comments included referring to the protesters as “apes” and “zoo animals”, suggesting that someone get a “fire hose”, and replacing a word in one of our school spirit chants to insult those engaged in the protest. 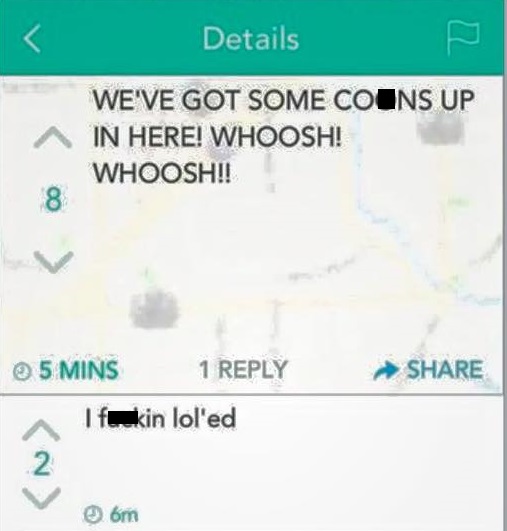 Daniel*, a University of Miami junior had this to say regarding the responses to the Black Lives Matter protest, “I’ve urged my peers to stay off of Yik Yak and to not respond to people’s negative commentary on other forms of social media (Twitter, Facebook, etc.). How can we be surprised by the ignorant displaying their very ignorance? Does a duck not quack? Does a bird not chirp? Does a snake not hiss? When you disturb the peace, people are going to take notice. And when you take people’s peace there will be repercussions and consequences. The key is to remain vigilant. ‘Eternal vigilance is the price of liberty’ – Wendell Phillips. If you find yourself succumbing to anger (and trust me no one’s more enraged and infuriated than I am) allow yourself to be impassioned but then be driven by this passion. Be vexed by the continuous killings of our young brothers and sisters. Be outraged that those responsible for these deaths, even those we entrusted to protect and serve, have continuously been found innocent in the eyes of the law. Remain steadfast in the demanding of justice and the removal of ignorance from the minds of our own people. Then, and only then, can we take aim at the individuals poised to try and slow us down and belittle our fight with negativity and destruction.” 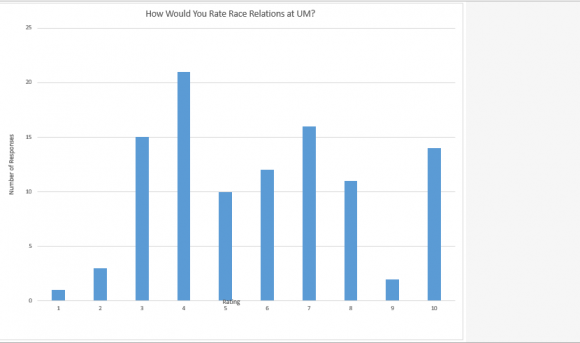 Though there were a few perfect scores, and the majority of the data points to an above average or great perception, of those who responded, the rating most frequently chosen was that of four which is below average. Perception is a product of experience, but for many minority students on campus, their experiences at times have been less than ideal.

Mathew*, a senior, shared one such experience, “So last year I was in my last chemistry class. Everybody is making their way into the class room over in Cox. So everybody is sitting in rows and I sat towards the bottom. This Asian kid comes in and sits next to me. Professor walks in and passes out the test while we’re putting our stuff away he comes over and ask ‘Do you have enough room?,’ to the Asian student. He looks at me and ask could I move up a row. Mind you, I sat down and the Asian kid came in after me. Everybody is still in their rows sitting together. I was the only black male in the class. I asked the professor ‘excuse me sir you don’t see a problem with anyone else?’ He said ‘I just try to space students out,’ He didn’t answer my question.”

“It was the beginning of the semester and I had discussed with my peers and my parents disappointment in the lack of opportunities and support that blacks in the School of Engineering had. There is also a lack of an apparent retention program for minorities in the School of Engineering, and I wanted to bring it up to the administration. My peers and I had discussed it and were fed up with the lack of retention. We all also had horror stories about out classes and professors, and their lack of cultural awareness. It’s almost like it was a language barrier. I was able to meet with a senior staff member but during the meeting he was very cold. He kept asking for proof, but it is hard to prove a feeling, so I suggested that He check the retention rates for minorities graduating in engineering. As I tried to explain how I felt, he was in my opinion being dismissive of me. His response  to the issues that I brought up were, ‘there is nothing that I can do about the past’ and he proceeded to direct me to speak with a black faculty member about my concerns. ” – Sonya,* class of 2015.

Though the University states that eight percent of its students are African American, minority students are still underrepresented in the classroom. It is not unusual for there to be only one African American student in a class of 40 to 50 students. There is also a lack of diversity among the faculty; there are few African American professors at this University, and not many of them are tenured. While many of the professors at the University do their best to create a pleasant learning environment for everyone, there are those who lack basic cultural awareness which can form a barrier between themselves and their students. A consequence of this is that students may feel as though they have to work harder than their peers in order to prove that they too deserve to be here. This sentiment was echoed by several post on Yik Yak assuming that all minorities that attend the University of Miami are receiving need based scholarships and that the admissions standards were lowered when admitting minority students. 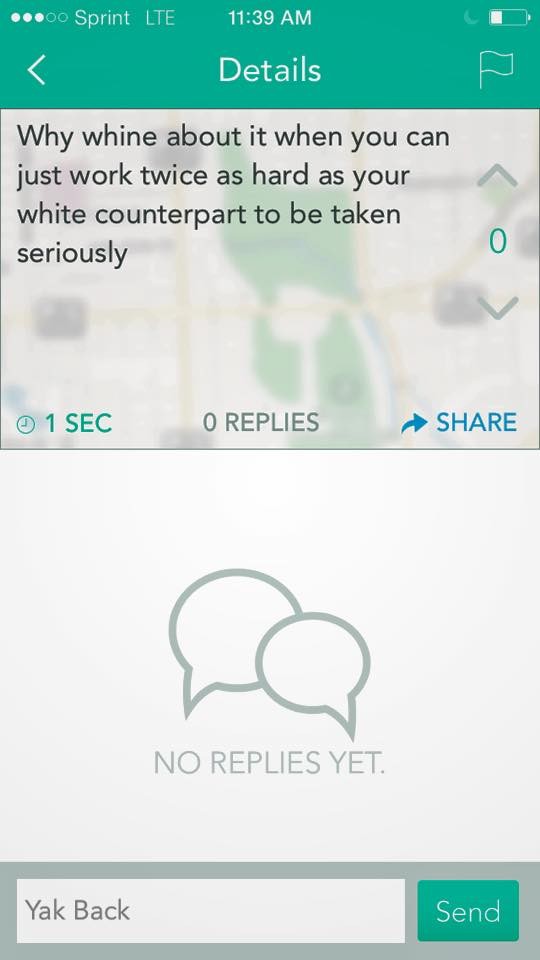 ” I was sitting in the admissions office with my fellow p100s including the p100 staff and we were waiting for a special tour; the special tour was a predominately black middle school, we get a lot of those and high schools. We sat waiting for 15 mins only and then one of the p100s said ‘can we go they’re not going to show up and I’m sure this is the same group that cancelled before.’  I sat listening and then our staff told her ‘we could wait 5 more minutes.’ We waited. They still didn’t show so we were told to leave and she said ‘we need to stop giving tours to them. Like what would we expect? Have you seen the kids on these tours?’ So I looked and just to check to be sure said ‘you mean black kids?’  and she said ‘yes. waste of my time’ and stormed out. We were located in the admissions office, parents were milling around other p100s. No disciplinary action was taken towards her position as p100.” – Jessica,* class of 2016.

No student should be made to feel unwelcome or uncomfortable in their own home. The goal should not be solely to maintain the positive image of the University or to change perceptions on race; the goal should be to change the experiences had by a number of minority students on campus. To do this, it will take a unified effort from both administrators and staff, the administrators willingness to listen and assist, and the willingness of students to be transparent about their experiences. The University of Miami is praised for its diversity but, diversity is only an asset when properly utilized.

*names have been changed to protect the identities of the students.

Homecoming Then and Now

Libya: What you need to know