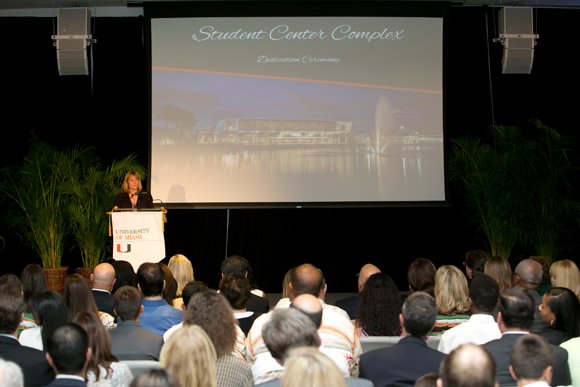 Last week, in the midst of the Homecoming festivities and alumni weekend, the new Student Activities Center Complex was officially dedicated  in a private ceremony. In attendance were university administration, faculty, trustees, donors, student leaders, and members of the community.

The facility was made possible by a $20 million dollar lead gift from the Fairholme Foundation and contributions from other generous donors. In 2006, students also voted to impose a fee on themselves in order to help make this building possible.

Following the dedication, those in attendance were able to take self-guided tours of the new facility as well as watch performances by some of the universities dance groups. The alumni and members of the community were blown away by the new facility.

“Unbelievable! Fantastic! Dr. Whitely deserves more kudos than she’s getting because she did an unbelievable job!”- Harry Rothwell, All Canes Owner

“Magnificent facility! It’s fantastic and a great achievement to make it work in this economy. It’s the fulfillment of the vision of many and it changes the face of the campus.” – Barry Blum, UM Law Class of 1982

“This is a great and dynamic new facility, I’m kind of jealous that we have it now instead of when I went here. It adds to the mystique of being a hurricane. The additions to the University Center are also great and this is a great general area.” – Nathan Jones, Class of 2001

“This is an absolutely beautiful home.” – Javier Del Rio, Class of 2003 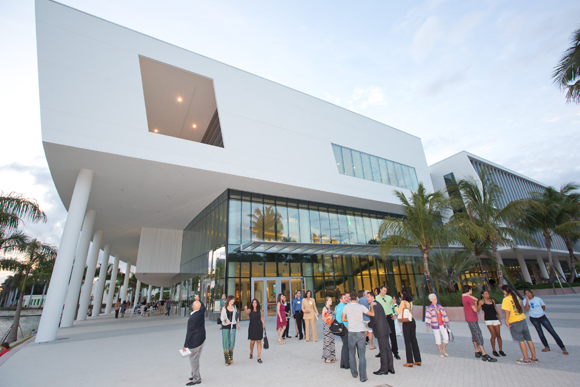 Current students were also in attendance at the dedication and it provided them a unique opportunity to be able to speak with alumni and trustees and learn more about how the university has changed. The donors and trustees were also able to hear how students have benefited from the new addition to campus. The common idea espoused by the students was the feeling of togetherness, a feeling that was tangible throughout the dedication ceremony. The SG president, the Student Bar Association president, and the president of the Graduate Student Association all spoke, reinforcing the sense of community the new Student Activities Center Complex as helped to create. The buildings location helps connect law and graduate school students to the rest of campus an make them feel as though they are a part of the hurricane family.

“The SAC adds to the campus as a whole and it brings together a lot of organizations that were previously without a home. UM focuses so much on diversity and the SAC provides that opportunity for everyone to come together. “– Michael Vante, Class of 2015

“Two words brought up often are transformational and game changing and they perfectly encompass how the SAC has impacted the campus. From the student organization suite alone, I have come across people I never would have met otherwise.” –Mischael Cetoute 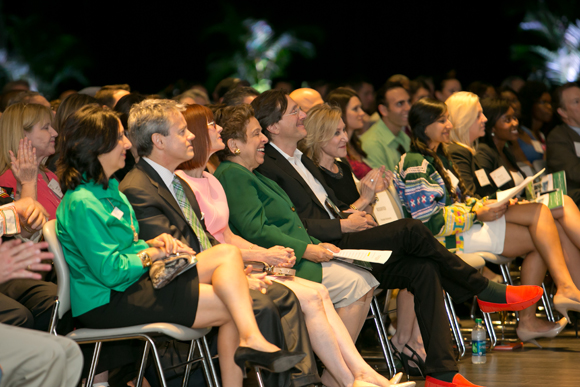 For university administers and student government the dedication was a source of pride; they were able to look at everyone enjoying the new facility and see that their objective had been reached. It was a day of reflection but also one of looking forward to what the future of the university will hold.

“Today was a fabulous day and I am so proud. This has been a 10 year project and it took the donors, the student leaders, and it has finally become a reality. This is something that will enhance student engagement for decades to come.” – Dr. Pat Whitely, Vice President of Student Affairs

“Seeing the student activities center project come to a close was just the beginning of chapter of greatness on campus. The amazing changes that have occurred will improve campus life, campus community, and is a symbol of the excellence this university has to offer. It was an honor to serve as SG president and contribute in a small way to this game changer.” – Nawara Alawa, former SG president, Class of 2013

“Today has been a great day, it’s been so wonderful to see so many donors and alumni on campus back to help us officially dedicate the building. The day has been so full of energy and excitement and I am so proud to have been a part of it!” – Bhumi Patel, SG President, Class of 2014

“It’s really great to have all of the alumni back and to have the past, present, and future of UM together. It is important for the people who got us to where we are to see where we are going”. – Justin Borroto, SG Vice President, Class of 2014 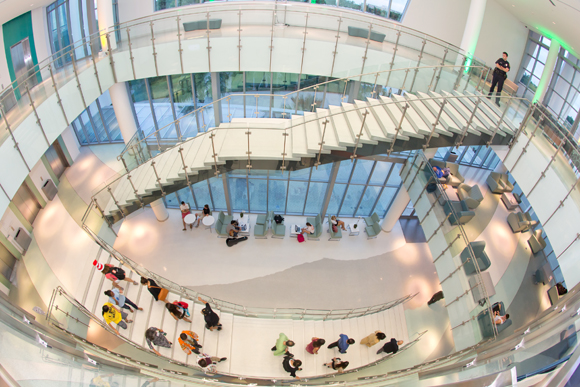 If you have not yet visited the new Student Activities Center, make time to take a trip over there. Now is an especially great time to visit as there are alumni on campus that you can meet and share stories with. The Student Activity Center Complex is a state of the art facility that has and will continue to revolutionize the campus for generations to come.